For pioneering Canterbury car dealership Gary Cockram Limited, the journey is continuing on a more refined path with the opening of its new location on the corner of Durham and St Asaph Streets, a sophisticated new building which aligns itself with the elite direction being taken by its Hyundai and Isuzu brands.

The Cockram’s automotive trading dates back to 1940 when Gary Cockram’s father, Bill Cockram started a used vehicle sale yard at his Linwood home. In 1948, he opened Christchurch’s first out-door used car display on the corner of Moorhouse and Colombo Streets.

Gary took to accelerate the business in 1975 and opened the Japanese Car Corner on Tuam and Durham Streets, where Gary Cockram Limited has continued to operate from until November 2019. Gary Cockram Hyundai was established in 1996, then Gary Cockram Isuzu in 2010.

Last year Gary Cockram Limited extended to North Canterbury with a new dealership based in Rangiora, and development of the Durham and St Asaph Street site began.

Gary Cockram Limited marketing coordinator Joanna Willmer says the company had been operating from separate buildings, with the old Isuzu show room repurposed from another Cockram dealership, and the old Hyundai showroom built about 1996.

At the time it was seen as an elite, high-end show room, but now it’s time to move ahead.” She says the Hyundai and Isuzu brands are moving in an elite direction.

“The price point isn’t rising, but the brands are starting to employ a more high class look and feel. With Gary’s sons Dougal and Angus now separating their own automotive businesses from the Cockram Group, this is also an opportunity for Dougal to make his own mark.”

Joanna says project architect and builder Miles Construction have provided a very sophisticated design and build.“There are a lot of neutral colours which really makes the vehicles stand out,” she says. 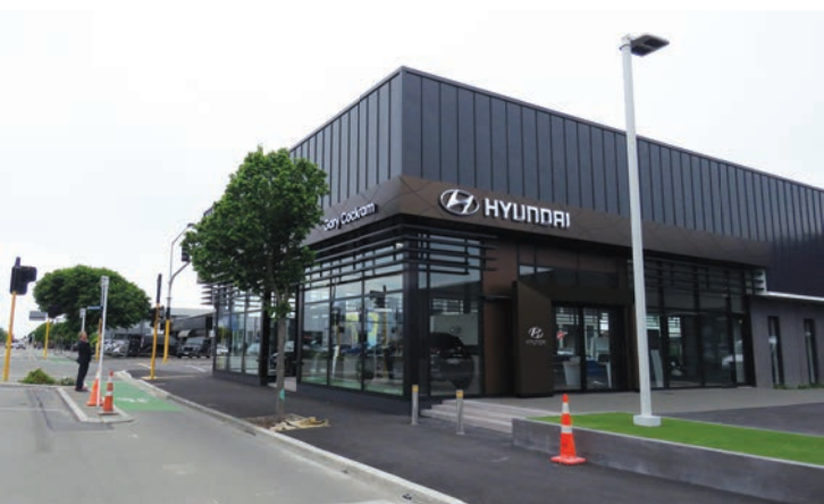 The sophisticated new showroom for Gary Cockram Ltd which aligns itself with the elite direction being taken by its Hyundai and Isuzu brands.

“It is simple architecture which stands out on its corner of the street and gives a lot of substance to the Hyundai and Isuzu cladding. It looks updated and fresh, moving towards the elite look but still comfortable. “It is refined and classy architecture which lets the vehicles speak for themselves and the space works how it needs to.”

The all-in-one Hyundai and Isuzu dealership and service and parts department replaces the previous separate Hyundai building on the Tuam and Durham Street corner, and the Isuzu building on the opposite Durham and St Asaph Street corner. “It makes it easy for customers to find what they are looking for,” Joanna says.

Gary Cockram Limited’s new location opened on November 18 and the company will host a corporate opening event at the end of January. Meanwhile there are a host of opening specials on offer across the range.They encourage anyone to come in for a visit.