Early contractor involvement (ECI) has helped save literally millions of dollars on the Matakohe Bridge project and helped Fulton Hogan to win the Hirepool Construction Projects Over $1 million award at the 2019 Northland Branch of Civil Contractors New Zealand competition.

Piringatahi is now the longest super tee bridge in Northland, says Fulton Hogan Northland regional manager Keith Cocking, indicating the complexity of the project, which saw bridge piles vary in length from 14m to 20m and the bridge piers 10m up in the air.

Around 130m of temporary staging was used to provide construction access to build the piers. Each bridge beam (there are five per span) weighed 50 tonnes and was transported to site using heavy haulage units from West Auckland as there was nothing in Northland large enough to transport such heavy weights, says Keith.

With the project requiring a footprint of 375,000sqm, and situated only a few hundred metres upstream from the Kaipara harbour’s Kirikiri inlet, environmental management was key, he says.

The team managed to achieve environmental benefits before a sod of earth was turned with the competitive ECI tender allowing the contractors to come up with alternative designs.  Fulton Hogan and Aurecon teamed up to deliver a design that put the realignment through a local quarry that Waka Kotahi owned but was surplus to the original designation.

This meant rock could be used saving around $4 million in costs as well as significant time, says Keith. The change reduced the overall quantity of earthworks that needed to be moved by over 200,000 cubic metres. 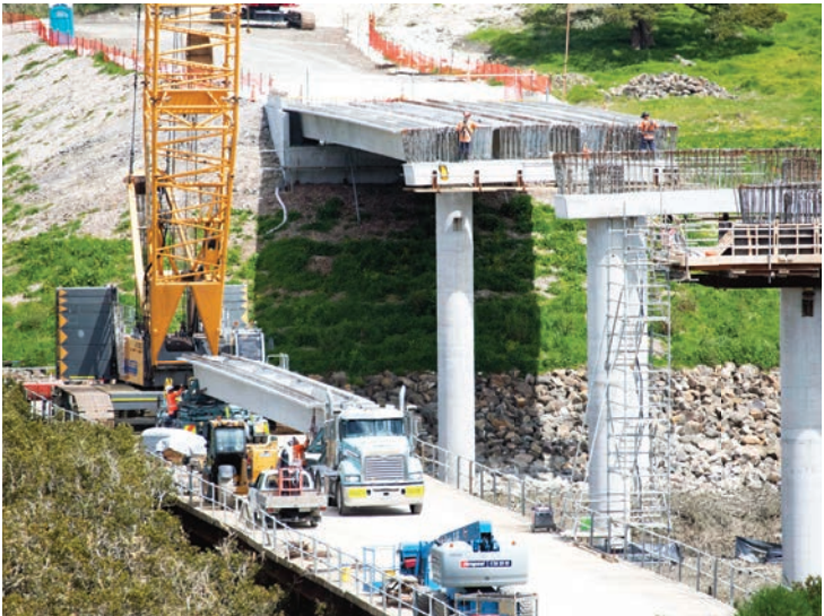 “The disused quarry not only supplied 100,000m3 of superior materials to build the alignment with but also became a place to fill the 100,000m3 of unsuitable materials,” says Keith. “The creation of a single major dumpsite meant consolidation of environmental controls.

“The disused quarry has now been reinstated to farmland and shared path interpretive trails, improving the amenity value of the previous site to the community.” This became a win for Waka Kotahi, a win for the community and a win for the environment.

He says exceptional planning was another key to the success of the project along with robust, disciplined project controls. “As engineering consultants, Aurecon led the consenting process with significant input form the Fulton Hogan project management team.

“Collectively we went from business case to construction in just nine months, a process that often takes two years. Consents were lodged in three months, awarded in six and enabling works started in nine,” he says.

Objectives we set for collaboration included working with Iwi and the community to get things done, creating enduring relationships with customers and making the best use of resources in the team and in the community. “Together with Waka Kotahi we worked hard to get the community behind us and it really paid off. ”

Keith also credits the high performance team of Fulton Hogan’s most skilled project management and engineering staff as having been a vital part of the project’s success. Construction began in January 2018 and the full length of the new road was open to vehicles in May 2019.

We needed to be transparent and open with our actions and behaviours to develop trust that ultimately allowed decisions to be made quickly. Without mutual trust this project would not have met the aggressive timelines set and been such a huge success.”