Taipa Bridge a boost for community

The new two-lane bridge will provide residents with more reliable daily travel options and open up accessibility in the region.

In addition to the award-winning Matakohe Bridge project Fulton Hogan has also recently completed construction of the Waka Kotahi NZ Transport Agency project, the Taipa Bridge, which opened in December.

According to Fulton Hogan stakeholder manager Melanie Norris, close community involvement was a key aspect of the success of the Taipa Bridge project.“Taipa is a small place and we were in their backyard for nearly two years so it was important that everyone was involved,” she says.

The project came about as the old Taipa Bridge was unable to cope with handling the traffic volumes and safety requirements of locals and visitors as they flocked to the area’s popular fishing and swimming spots, says Melanie.

The aim is for the new bridge to provide residents with more reliable daily travel options and act as a gateway for tourists travelling to the area’s holiday destinations.

It is expected to have profound economic, cultural and environmental affects in the Far North, opening up accessibility to the northern coastal areas.

The Waka Kotahi project was delivered by Fulton Hogan, WSP and Aurecon and came with many challenges to take Taipa Bridge from a 70-year-old single lane structure to a brand new two-lane connection enabler.

These included constrained space within the Taipa township, complex geology including soft soils in the estuary surrounding the bridge, works within and adjacent to environmentally sensitive estuaries and being built in close proximity within 200mm – of the existing bridge.Aurecon used digital engineering tools for virtual reality visualisation, 3D modelling and 3D laser scanning to tackle the engineering challenges. 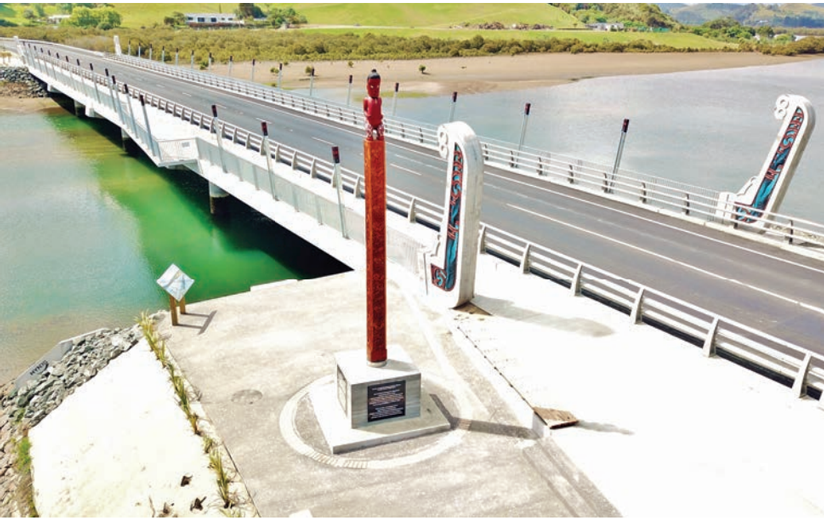 The distinctive design of the bridge, based on a giant waka hourua (traditional double-hulled sailing canoe) standing in tribute to Polynesian explorer Kupe, was the result of collaboration between Waka Kotahi and hapu along with community feedback.

The distinctive design of the bridge, based on a giant waka hourua (traditional double-hulled sailing canoe) standing in tribute to Polynesian explorer Kupe, was the result of collaboration between Waka Kotahi and hapu along with community feedback.

The design acknowledges Taipa as an important landing place for Kupe in Aotearoa. It also wishes all who travel over the bridge a safe journey.

“The kids from Taipa Area School made us morning tea on several occasions because they were so appreciative of our work for their wee town and the beautiful structure provided by Waka Kotahi and constructed by Fulton Hogan,” says Melanie. “For me, this project has been about the people – the sense of being part of a giant team with the community we’ve been working in.”