Rob makes his mark in Queenstown

Rugby, travel and building have figured strongly in Rob Ferguson’s life and his broad accent leaves little doubt about his origins as a Scottish border dweller.

However several years of wanderlust saw him working and playing rugby in Canada and Australia, followed by a stint in Christchurch, and he is now the director of Queenstown-based business Ferguson Builders.

Rob moved to New Zealand in 2011 and began project managing for an award-winning company in Christchurch.

He approaches everything in life with the zeal of a true-blooded Scotsman, a trait that has followed from from his childhood.

“In 2014 I took the leap and went out on my own and knew that in applying that same passion, determination and hunger to my own business that I had so far in life, Ferguson Builders could be a successful reality.

“My company has grown out of a love of the building trade and a passion for delivering top quality workmanship to all home builds.”

Having settled in Queenstown with his Kiwi wife, Mel, and now with two young girls and more than 14 years in the trade, Rob and his team are making their mark on the Queenstown landscape.

“It’s been a challenging experience, it’s been an eye opener; you work a lot of hours, you work hard for it, but it’s also been very enjoyable,” Rob says.

Owning and running a business has enabled Rob to meet and get to know many people both on and off the job.

These relationships have been crucial in having sub-contractors and suppliers on the same page in order to meet completion deadlines in the hectic Queenstown construction market.

“Essentially we are aiming to get a great product to the clients at the end of the project. There’s a lot of preparation work that goes on behind the contracts.” 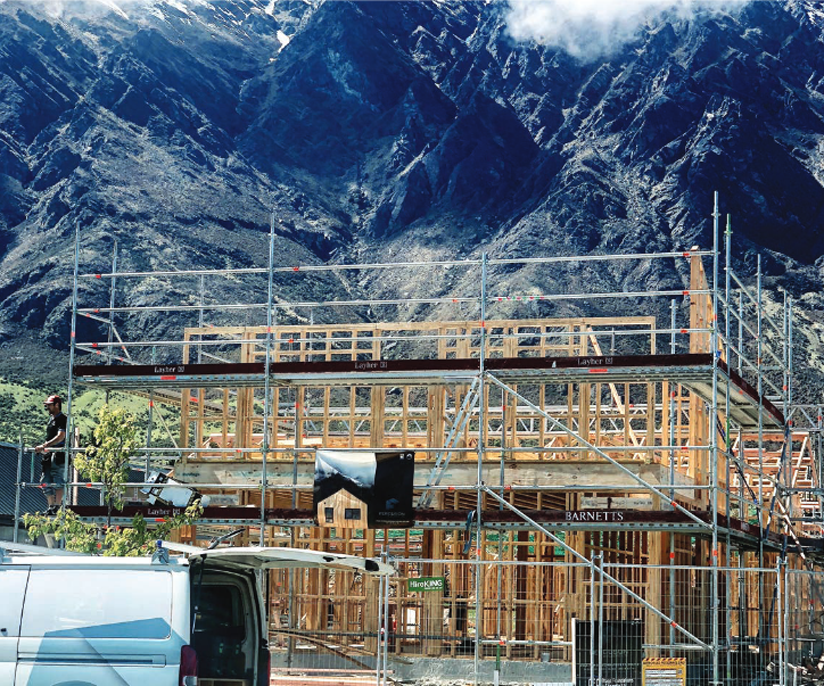 Ferguson Builders prides itself on delivering top quality workmanship on all its homes.

The success of Ferguson Builders and its current workload means it now employs six staff and that Rob is mostly off the tools, project managing, quoting and preparing consents.

“We are at the stage now where we’re looking to take on a quantity surveyor so we can start doing this work in-house, even on the bigger jobs.”

One difference Rob has noticed between the Northern Hemisphere and New Zealand is a greater degree of customisation here.

There was more prefabrication and more wide-spread use of SIPS (structurally insulated panels) in the Northern Hemisphere.

“I was lucky enough to work with a great company in Scotland run by a man that became not only my boss but like family to me. One of the highlights was working on imported timber frame houses from Norway built in a panelised system so the house could be wind and watertight within a week and ready for gib.”

The variety of materials and house designs Ferguson Builders works with in Queenstown is brilliant Rob says.

“There’s a massive variety, no house is the same.”

Jack’s Point and Hanley’s Farm subdivisions are currently construction hot spots for the business. One contract was gained because the client had seen Ferguson Builders’ efficiency on another job.

The company can liaise with Jack’s Point designer, Danny Kissell, of DK Designs to assist clients with their design ideas, or can to build to any designer’s plans.