Diversity the key for long-running firm

Elms Carriers has a large array of different truck types to suit every transport purpose.

When Leslie Elms picked up his brand new International truck from Palmerston North in 1927, he donned his overcoat, sat on a benzene tin and drove it back to Hastings.

No cab in those days – just motor, chassis and maybe a front windscreen.

The International truck was the start of what would become LE Elms & Sons, perhaps better known in local circles as Elms Carriers.

Leslie’s ‘in-law’s were a farming family with farms around the Hawke’s Bay.

They told him that if he bought a truck they would give him the work carting goods to the farms and then back-loading with wool and whatever else might need carting.

Hand-loading and unloading was the order of the day when Leslie first started business and a photo shows him with his International helping with cleanup just after the 1931 Napier earthquake.

Shovelling coal from rail carts to the truck and shovelling back off again was usual, till Leslie’s son, Bill – always inventive – said he wouldn’t be doing that for the rest of his days and built a crane for the job.

In 1949 Bill and his brother John took the business over, joined by Bill’s son Robbie as a driver in 1977.

Now holding the steering wheel of the business, Robbie continues to follow his love for driving, regularly putting a 10-hour day inside the cab.

Diesel mechanic Allan makes up the fourth team member and after being part of the Elms Carriers journey for over 30 years is very much part of the family.

“Being a family business there’s a personal touch – a customer rings, they get me and I will say, ‘I’ll come and do that’.”

“Our customers are more like friends to me. We have family principles and try to do the job once and do it properly—we care about what we do.”

The business operates 15 trucks now. The International, sadly, is long gone but there are still Bedfords in the fleet—slowly being retired—the last one to retire was a 51-year-old girl but she won’t be sold.

We have Isuzu, ERF’s and Fodens. They are mostly all diesels now.

“We thought we were made going from petrol to diesel—now we’ve gone Japanese and there’s so much comfort and advanced technology.”

With a large array of different truck types to suit every transport purpose except livestock, diversity is one of Elms Carriers keys to success.

“Our busiest trucks are the little short four-wheel tippers.”

“They do the highest mileage doing around town deliveries of shingle, lime, sand and soil—that sort of thing.” 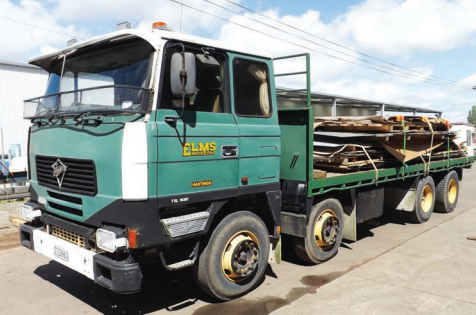 “We have special trailers built for carting precast concrete panels throughout the North Island. We’ve motorized Jinkers and a lot of flat deck trailers.”

If and when Robbie considers retirement, Richard and Mark are being groomed to take the mantle and continue the family business that was started by their great grandfather and a cab-less international truck, well into the future.

Tags:
Previous Article
QRS goes from strength to strength
Next Article
Ingenuity and expertise sought after