There are four concepts within the EcoSpace range – a 10sqm cabin/sleep-out, a 13sqm cabin with ensuite, 18sqm self contained batch and the 26sqm tiny home.

Auckland builder Gavin Barr is excited about how well his new EcoSpace cabin and tiny home concept was received recently at the Auckland Home Show.Gavin’s been involved in the residential building sector for 13 years and through hard work and commitment to a dream idea he’s been carrying for many of those years he has now introduced to the market four EcoSpace designs.

“Back when I was looking at starting as an apprentice, the whole container home phenomenon exploded, driven by people looking at alternative housing solutions.

“After a conversation with my father, who was also a builder and my brothers discussing potential business ideas for the future before I even started in the industry,” says Gavin.The idea was formed of producing off-grid, sustainable housing solutions that could also be easily transported.

Gavin thought about this over the years, and this idea stuck with him while he was doing general residential projects. He is really happy the vision has now become reality.Gavin says he has always been a big believer in trusting your intuition and putting complete effort and energy into realising your dreams.Track back 24 months and with enough money saved he decided to put his energy into launching this idea.

He designed four concepts with specialists in eco-friendly architecture “Eco Habitats”, created a website and branding, and social media following.Taking the leap of faith to present one of these designs – the self-contained cabin, at the Home Show – was the best thing Gavin says he could have done.

“Reaction to the cabin and its quality was huge. We were one of several cabins located down one of the streets and I could just see how visitors could discern the differences in our cabin. It was very heartening.”That moment has generated five sales for Gavin since early September and the enquiries keep flowing.

Currently there are four concepts within the EcoSpace range, from a 10sqm cabin/sleep-out, a 13sqm cabin with ensuite, an 18sqm self contained batch and the 26sqm tiny home.When Business North spoke with Gavin he was eagerly looking forward to a rather special project at Waiheke Island.

“We have the perfect first clients who want us to develop their whole section on the Island into an amazing eco-focussed self-sustainable compound, with the 18qsm self-contained bach and two separate 13sqm cabins offering a range of accommodation options.”

Gavin says he’s proud of the four pillars EcoSpace has been founded on – sustainability, flexibility, affordability and quality. “It’s possible to achieve all these goals and these days more and more people are concerned for the environment and the impact on it that building technologies present.”

In the case of EcoSpace Gavin, chose to use a panel technology known as Formance SIP Panel’s as opposed to timber framing. He says there were several key reasons why he was drawn to this product. “Durability, sustainability, and energy efficiency. The outer layer is recycled Canadian Maple where 90% of the tree is used while the inner core is EPS, the most recyclable plastic in the world. 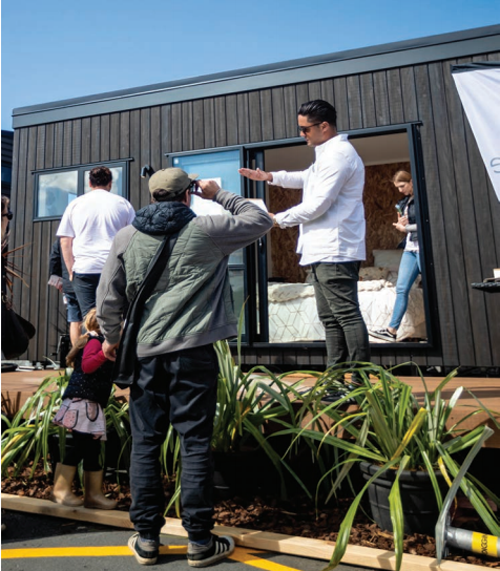 “The panels are so energy efficient in terms of controlling the internal environment temperature that you don’t need any heat source with a very high R rating.”A home’s building envelope is the most critical element of a sustainable home.

Formance Structural Insulated Panels ensure the outer and inner claddings are separated, with no room for the air inside the home to seep into the membrane.As for the future Gavin says he’s looking forward to featuring at Field Days, displaying his show-home at other venues over time.