The construction of Dunedin’s Peninsula Connection is gradually adding an enduring recreational corridor in the city. Started in 2007, the project is being designed and constructed in several stages across 26km of the Otago Peninsula between Portsmouth Drive and the Taiaroa Head Royal Albatross Centre at the Otago Harbour mouth.

The current stage involves widening Portobello Road to make it safer and more attractive for everyone who uses the road – locals, visitors, cyclists, walkers and runners, drivers, nearby residents and businesses.

The peninsula road is narrow and winding, with little room for pedestrians and cyclists. There have been serious accidents in the past and while the Peninsula Connection will create a valuable recreational amenity, at its core it is a safety improvement project.

Most of the road is bound by the harbour and seawall on one side and land on the other; it is being widened and raised, a new rock seawall built and a shared path for pedestrians and cyclists created.Work will also include seating, planting and rest areas.

At the start of this Dunedin City Council project, the peninsula road was divided into sections to be widened in stages. Half of these have now been widened, mostly by reclaiming six metres of the harbour foreshore.

“Work has been underway since 2007 and the Dunedin City Council has widened various sections since that time,” Glenn says.

In 2013 an overarching resource consent was granted for the balance of the coastal sections of the project.“The scope of the current works is to create a continuous shared path all the way from the city to Portobello.”

This involves joining some of the uncompleted sections, with Fulton Hogan being the main contractor and the design provided by GHD which operates both in New Zealand and internationally. 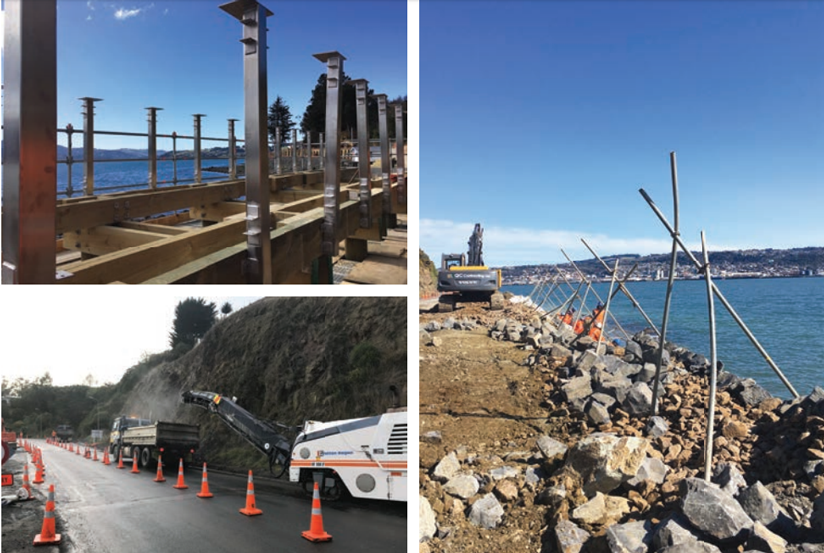 The Peninsula Connection is being designed and constructed in several stages across 26km of the Otago Peninsula between Portsmouth Drive and the Taiaroa Head Royal Albatross Centre at the Otago Harbour mouth.

The project’s complexity lies in the narrowness of the road, building a rock sea wall within tide restrictions and trucking in many thousands of cubic metres of rock fill; more than 3000 truck and trailer loads of fill were needed for the Turnbulls Bay to Portobello section alone.

“The logistics around keeping the traffic flowing and getting the material in place and building it on this narrow corridor is a major challenge.”The original sea wall along the road was hand-built and is regarded as historic.

Consequently, it had to be retained by entombing it within the new wall and exactly replicated.“It needs to be of the same type of rock, that limits us to sourcing it from one specific quarry and it has to be laid by hand so it’s very labour intensive.

It’s not something you would expect in this day and age.”Sections of the Peninsula Connection that have been completed have been well received by the public and the entire project will be a “fantastic” amenity for the city and tourists alike, Glenn says.

Tags:
Previous Article
Clients urged to get online with system
Next Article
Good staff the core of successful company