Focusing on staff wellbeing and enjoying time out together as a team has been a key to the success of Dimension Building.

Award-winning Timaru construction firm Dimension Building has long been recognised for the effort it puts in for its clients, and now the company is turning that care and attention to its own 11-strong team, initiating a new wellbeing programme this year that’s getting results in all the right areas.

Richard and Summer Phiskie’s Dimension Building has been operating since 2012.

Richard pledged to always hire based on attitude rather than skill set.

“One of our branch managers first came to us when he was 17 wanting a job,” Summer says.

“He had this clear-file full of pictures he’d taken of work he’d done. It wasn’t quite top quality stuff, but Richard didn’t care about that because he had this 17-year-old proudly displaying his work and wanting to talk about it,” she says. “It showed passion for his trade and Richard really believes quality work stems from this.

We can teach the required skill set, but if it’s not already there, a great attitude is harder done.”This policy has led to a tight-knit team at Dimension Building who are friends outside of work, and a really low staff turnover.

In December, goal-setting Richard was looking at what he wanted to work on in 2019 and one of those things was the general wellbeing of his team.

“After putting all the effort he has in to training, we can now put some effort in to making sure their quality of life within work is good.

“A – so we can retain them, and B – because if they’re happy on site, that is reflected in the work they’re doing.”

Coming up with a suitable programme was a matter of incorporating a ‘play together, stay together’ model, and listening to the banter amongst the team to identify their interests and concerns.

“There was a bit of office banter about who was fitter than who, so Shelley our office administrator suggested the team might enjoy a bootcamp,” Summer says. 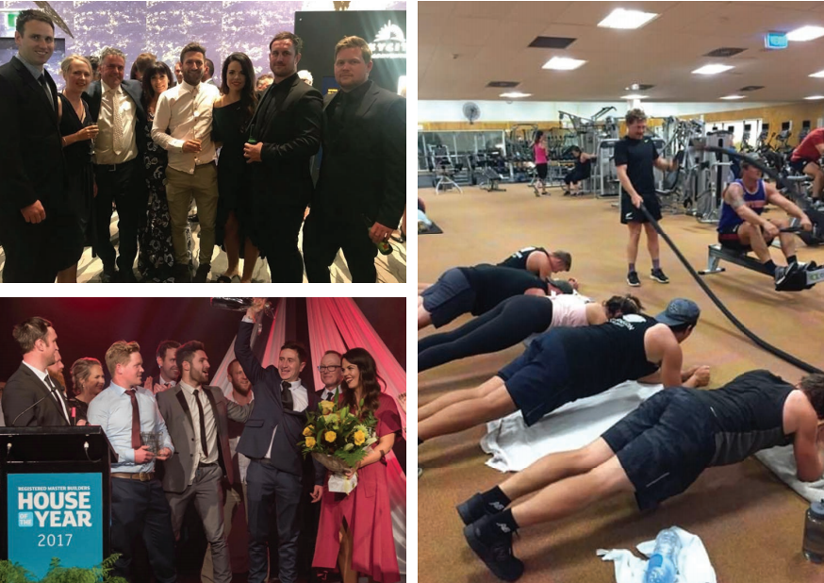 Dimension Building has long been recognised for the effort it puts in for its clients, and is equally focused on the wellbeing of its staff.

“We’ve just finished an eight-week boot camp with Amanda Gray from CBay Fitness where 11 staff lost a total of 47kgs and 26% body fat.

“It’s an amazing result, but the thing we’ve loved the most is the boys have come back to Richard and asked if they could do another eight weeks.”

Dimension Building attended a mindfulness workshop where life coach Tenika Reihana provided practical strategies around responding to situations rather than reacting to them, which was especially beneficial for those in leadership roles.

She also discussed the importance of identifying and acknowledging your own and others’ strengths and weaknesses, which Summer says really helps on site.

Coming up, Dimension Building has plans for those in leadership roles to attend a Dale Carnegie training course “skills for success” which one of their project managers has already attended, and found really beneficial.

Mid-winter Christmas celebrations this year will be in the form of a My Kitchen Rules style instant restaurant cook off, stemming from the team’s group chat.

“The team has created a bit of banter around who is the better cook, we aim to find out.”