Designgroup Stapleton Elliott’s site redevelopment for Hawke’s Bay Toyota Napier has given the business an enhanced presence on Carlyle Street and improvements to its operational fl ow.

Napier’s Designgroup Stapleton Elliott is coming to the end of a long-term whole site redevelopment for Hawke’s Bay Toyota Napier, giving the business an enhanced presence on Carlyle Street and improvements to its operational flow.

Designgroup associate Ian Seddon says his company has provided an overall concept to redevelop the site, which as well as service, parts, and new and used vehicles, is home to the management team for Hawke’s Bay Toyota’s five locations in Hastings, Napier, Taupo, Rotorua, and Gisborne.

“We started with a job at the far end of the site and converted a tyre shop into a customer valet area for used car sales,” he says. “We’ve now designed a new service centre and show room at the front of the site, where a portico leads vehicles through to the workshop in the back.

“The layout has changed to suit how Hawke’s Bay Toyota wants to operate and a new way of how to purchase a new car. “It’s all about customer service. Customers can select the model they want, then the variations they want, and it comes out in the show room.”

Hawke’s Bay Toyota Napier’s new show room has space to display six to eight vehicles, up from the previous two to three.He says Toyota is a very good, strong brand which is getting better and stronger in its field, not just in commercial vehicles but also standard cars, and electric vehicles are also now a focus for Toyota.

“The changes we’ve made to Toyota’s Napier site have brought the site together. New car sales are a focal point and the service centre is connected behind it.

“The entry point has changed from the northern to the southern end of the street which is a big change to how people approach the service centre, but it means customer flow and operational flow is going to be more efficient, and customer experience and ease of operation will be improved. There is access from new car sales across the whole site and there are advantages in that.”

There is a long-standing link between the two firms, with the founders of each practice, Paris and DGSE director Brian Elliott, meeting at university and going on to set up Designgroup New Zealand, an association of individual architecture practices sharing resources and expertise, in 1989. 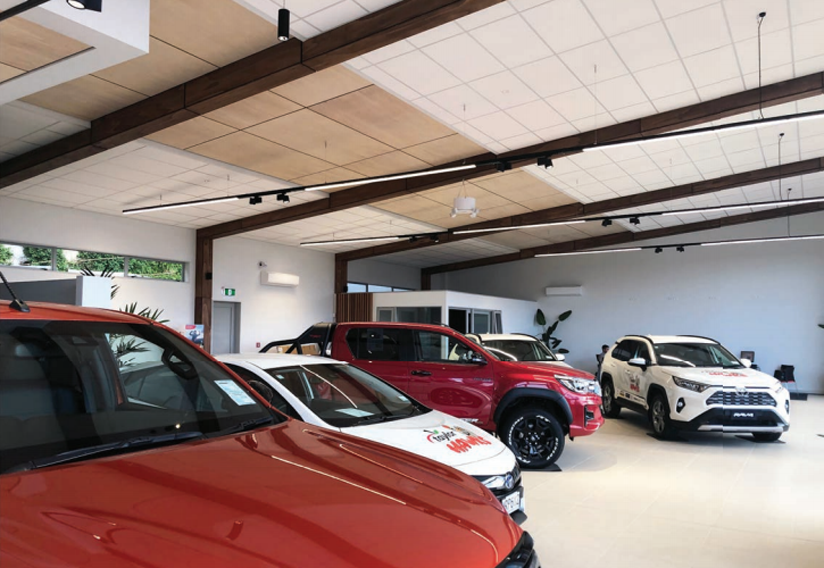 When Paris became sick with terminal cancer, his son Nic took the helm of PMA, with Brian keeping his promise of keeping an eye on the business and going on to become principal architect at PMA.

The three of them and their team, several of which have worked under PMA with DGSE for a number of years, are proud to now be part of the DGSE group. “We have worked together on many projects throughout New Zealand over the years,” Ian says.

“We’ve shared ideas and resources, so the merging of our practices together really was the next progression and has strengthened our ability to deliver projects at a national level, while retaining a regional focus.”