Lake views just the thin end of the wedge

The wedge house comes with views from every window over Lake Hawea, the Pisa Range and Clutha River.

The Wanaka Wedge House sets a new standard for Central Otago architecture, foregoing the traditional gable building forms, schist walls, and timber for a dark grey, corrugated metal wedge that seems to emerge from the ground on an isolated ridge facing the Southern Alps.

The Wedge House, as featured on Grand Designs NZ in September, is certainly a grand design. Home owners Justine Cormack and Marc Taddei chose the prototype design by American architect Jeff Day and had it revised for building in New Zealand.

Project builder Matt Colebrook of Colebrook & Co Builders says when adapting an American plan for use in the Southern Hemisphere, you can’t just spin it 180°.

“You’ve also got to flip it over sideways as well, so east is still east and the sun will still come in. It takes a long time to understand, even for the drafts-man who adapted this plan.”

Matt, who has worked all around New Zealand, says Central Otago District Council was so good to deal with compared to any other council he’s dealt with throughout New Zealand.

“Council was very excited about doing something different as well.” The design was converted to New Zealand Building Code and from imperial to metric measurements.

Justine and Marc got an engineer involved too as there wasn’t much consideration in the original design for the vast amount of engineering required by the high wind zone.The wedge form is 240sqm but only 5.4m wide.

A contrasting, light grey metal cube sits to one side of the high end of the wedge and houses a double garage and refrigerated wine cellar.

Special features for the build team include the timber tongue and groove ceiling. This compresses the kitchen, which has the lowest stud in the house at 2.7m, then curves up the wall of the open plan living space to reach its 4.5m ceiling.

It then runs back down the opposite wall of the living space then turns in to form the floor of the master bedroom at the thin end of the wedge. Challenges for the build team include the roof of the wedge, which is made up of just eight sheets of roofing steel. 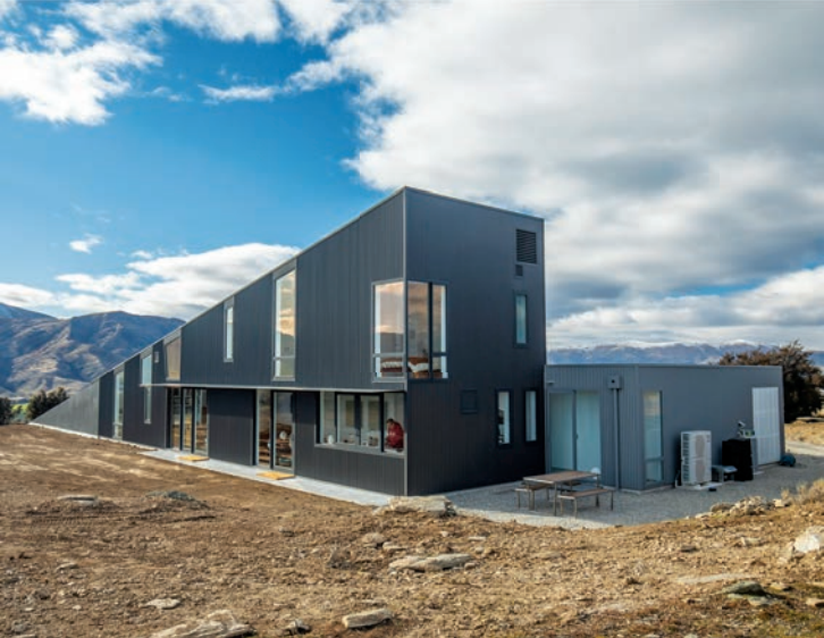 The wedge form is 5.4 metres wide and a contrasting, light grey metal cube sits to one side of the high end of the wedge and houses a double garage and refrigerated wine cellar.

The handling of these 24m lengths posed a challenge for the team.Then there’s the windows. They total about 30 and down one side of the house, are all trapezoidal in shape.

“Every single window had to be perfect to the millimetre, so there was a huge amount of effort in getting these windows right. We changed just one of them on site by about 5mm to make it right,.”This effort will pay dividends in the coming year as Justine and Marc experience four seasons in their extreme environment.

Matt has already experienced issues with the extremely high wind zone, as the build team would often call off work when they couldn’t see for the grit blowing into their eyes. “If it’s blowing two knots on the ground, it’s blowing 20 knots up there,” he says.

“If you’ve got a house that’s solid with the best insulated walls and the best joinery, you can just shut the doors and watch it.”Justine and Marc will be watching Lake Hawea, the Pisa Range, and the Clutha River in their view down towards Cromwell.

Their surrounding scenery is on a constant change from bright green in the summer to white in the winter, with shades of grey and brown in between. The sheltered courtyard area at the thin end of the wedge is enclosed by walls dotted with round holes. Matt explains this provides a buffer from the wind without too much wind resistance.

Colebrook & Co Builders spent eight months on site and the build team consisted of Matt and his then recently employed British backpacker Charlie Weller, a mechanical engineer who had never picked up a construction tool in his life before starting with Colebrook & Co Builders two months before this project started.

“We built the whole thing by ourselves,” Matt says. “Charlie was the perfect fit. A lot of older guys can be harder to teach and tell what to do.

“Charlie was a very fast learner and absorbed everything I taught him, and his inexperience actually allowed me to have a lot more control over the build. “We could have done it faster with twice as many people, but it would have cost more and the quality wouldn’t have been as good.”

Tags:
Previous Article
Home, views that take your breath away
Next Article
Apartments a stone’s throw from CBD