Pioneering Marlborough mussel farmer John Young has seen mussel farming grow from small beginnings in the 1970s to a nationwide enterprise with the shellfish now farmed in many places from Banks Peninsula, Tasman Bay, Golden Bay, Stewart Island and the Sounds to Opotiki and the Coromandel.

Yet he’s convinced there is much untapped potential remaining and that the industry is poised for considerable future growth. “It really is a golden goose, but we need to be careful that we can supply the market and compete effectively internationally. The way to do that is through innovation, observation and using science to keep us ahead of the game.”

The sheltered environment of the Marlborough Sounds remains the industry’s ‘jewel in the crown’, producing around 60 per cent of all greenshell mussels in New Zealand.

John heads Clearwater Mussels, which is based out of a newly built service and support facility at Havelock. There, the company makes bio-degradable sock cotton – long mesh tubes used in mussel farming – and carries out rope reconditioning and recycling of old floats.

Its office and engineering workshop is based there.Effectively, the company owns a number of farms, leases space and operates as share farmers, tendering for water space and working with other partners.

It currently employs around 46 full-time staff plus part-timers, managing more than 100 greenshell mussel farms in the Marlborough Sounds and Golden and Tasman Bays. The farms range from two hectares up to 100 hectares.

Mussels are processed at Talley’s Group’s factories in Blenheim and Motueka, and the PHR factory in Blenheim, Havelock, and sold in various forms: in the half-shell, whole-shell, marinated or for use in nutraceuticals.“I think we’re where we want to be in terms of the diversity of products produced for the market.”

Clearwater Mussels operates another service and support base in Golden Bay, leasing space adjacent to Port Tarakohe. This area is of growing strategic importance to the company, which is preparing for a big increase in production out of Golden Bay and Tasman Bay, (from today’s 1500 tonnes a year to 5000 tonnes over the next 18 months). 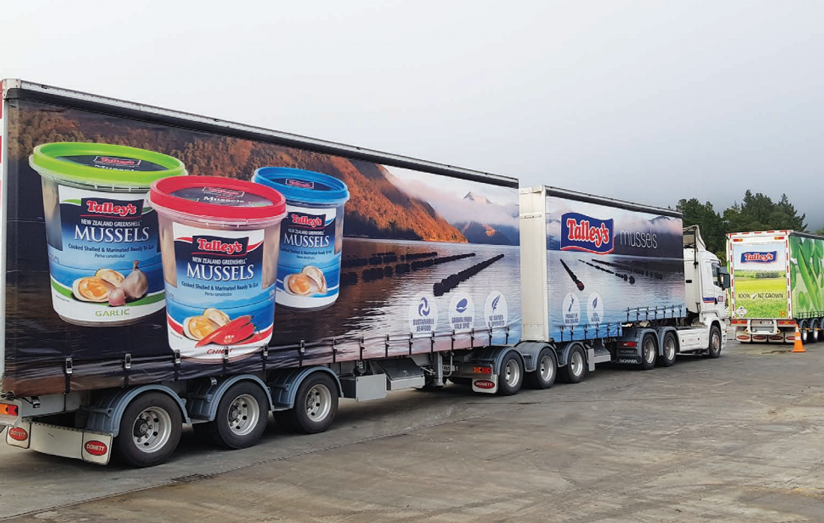 Mussels are processed at Talley’s Group’s factories in Blenheim and Motueka, and the PHR factory in Blenheim.

A new mussel farm has recently been installed in Golden Bay, with its initial stage covering 64 hectares. “It’s about as far north in the South Island as you can get….It has been a long 20 year process for the owner and share farmer to get new water space in Golden Bay, so we’re pleased to be involved – we’re seeding it now.”

Innovation is the key to success for this company. For example, it recently made a multi-million dollar investment in retentive rope to boost production per hectare. “We’re also creating environmentally friendly floats and a system of shock absorbers to reduce shock action from waves.

‘As well, we built a new boat for rough water a few years ago, constructed for us by Profab Engineering in Palmerston North.”John observes that attracting a skilled or, in fact, any labour force is an industry-wide challenge. Crewing and maintaining boats and managing other ancillary services is an ongoing headache.

Maintaining access to reliable mussel spat is also of crucial importance to the industry’s future. What set New Zealand’s greenshell mussel industry alight in its early years was the discovery of abundant mussel spat source on Ninety Mile Beach, followed by the discovery of another source in Golden Bay.

It created a genetically diverse stock and the ability to produce mussels year-round. The next step has been to try and recreate what nature does so well in a hatchery.“It’s being done by SpatNZ in Nelson and it’s something we hope to ultimately share in; hopefully it will help with security of spat long-term.”

Changing environmental conditions – and meeting environmental concerns – means farmers cannot afford to be complacent, he says. “Of course, increasingly, it’s up to farmers to prove they are sustainable and we have to be constantly adaptable. You can’t stand still.”