Western Bay of Plenty District Council’s strategic property manager, Blaise Williams, says the development of a Special Housing Area at Omokoroa, between Tauranga and Katikati is an exciting and pioneering development.

In its last term in ofﬁce the National Government passed legislation enabling Councils and individual developers to apply to have housing projects, considered signifcant in terms of potentially supplying level-entry homes to ﬁrst-time owners, fast-tracked by streamlining the process – these specially designated areas would be known as Special Housing Areas.

Omokoroa, some 16 kilometres north of Tauranga was considered by council to be an ideal location for such a project.

With the help of some foresighted property purchases adjacent to Settlers Hall Omokoroa, the council was in the ideal position to negotiate with the government on the building of what will eventually be a signiﬁcant housing project comprising 240 lots.

“The housing development is sitting on what was once a kiwifruit orchard,” says Blaise. “When completed it will extend over approximately 19 hectares which includes a large track of gully running through the centre,” he says.

The plan, he explains, is to have relatively small properties of 300 – 350sqm and that the gully system will itself be developed and enhanced with walking tracks, cycle ways and the like, to become a recreational facility for the whole community.

“We’re imagining single-level dwellings between 100–120sqm with different typologies. “A mix of two-, three- and four-bedroom homes will be built by our partner Classic Builders, of Classic Group, based in Tauranga.

“This is where the project is so exciting. “We think it’s a ﬁrst of its kind because it is a partnership essentially between Classic Builders and the council to deliver this housing settlement.” 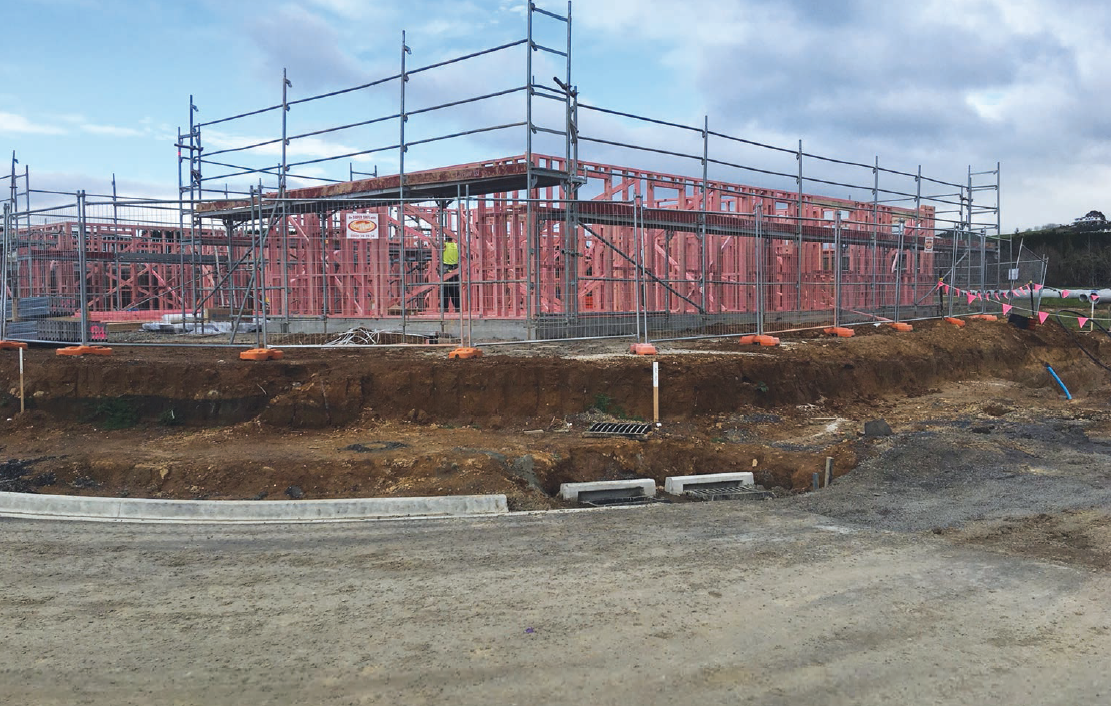 The first seven homes are under construction in the Omokoroa development, and are due to be completed by September.

He says the agreement the council struck with Government is that 50% of the properties will be built at market related prices and 50% of them at less than market prices.

“The affordable homes are able to be put on the market through a mix of achieving economies of scale in the development and through the developer not having to fund the upfront costs of land purchases.” Land purchases will occur on a staged basis as houses in each stage are completed.

To qualify to buy one of these houses the purchasers must be ﬁrst home buyers. Council insisted that there be a good range of housing in terms of design and construction materials to avoid the ‘dating’ of the area in years to come. Under the agreement with Classic Builders, the precinct will be developed in a staged process.

Seven homes were under construction when Business North discussed the project with Blaise, and they are due to be completed by September. Blaise says that it won’t only be ﬁrst home buyers who will potentially be interested in buying a home.

“I can see that living in this area will also appeal to older generations who are in the phase in their life where they want to down-size.

“The council has made a commitment to really invest in the gully system as a resource for all to enjoy and in time the community that will grow.”

Above all, council is determined that this Special Housing Area will in fact add value to the existing Omokoroa Community who rightly have an interest in the quality of the outcome.

“There are some issues to still address, including roading infrastructure that will need to be in place to service a development of this size. “Major supermarket chains have already bought land and no doubt other allied services will be established.”