Adventure Park rises from the ashes

When ﬁre ravaged the Port Hills of Christchurch in February of 2017, taking with it a large section of the City’s newest jewel – the purpose built Christchurch Adventure Park – it would have been hard to imagine that a phoenix could rise from the ashes.

Nestled and threaded through 364 hectares of commercial pine forestry owned by McVicars Timber, the Park was an adventurers heaven, unique and very popular amongst locals and tourists – domestic and international alike.

A range of shops, services and a café contained within a village in a forest setting created a distinctive alpine look and feel.

The Park had got off to a roaring start seven weeks before the ﬁre, with 50,000 adventurers, thrill seekers and sightseers stepping through the door in the ﬁrst seven weeks of operation.

Then came the ﬁre, ripping through two thirds of the forest, destroying all four ziplines and the chairlift’s massive haul rope in its wake.

The bike trails were all destroyed when the logs were ripped out of the trails during the clean-up after the blaze.

“It was horrendous,” says Anne Newman, the Park’s General Manager.

“The park had been hugely successful and to then be closed down because of the ﬁ re was devastating. At the time you’re just doing what ever you can to save the park.”

Anne says the ﬁre crew did an amazing job saving the village, which has retained that feeling of journeying into a forest and being in an alpine area—while further up the hill two thirds of the forest has disappeared.

A new haul rope, weighing 28 tonnes was obtained from its Austrian manufacturer in record time, new ziplines were obtained from the United States and sixteen new mountain bike trails cut, including some in forest spared from the ﬂames.

Following a massive effort by the park’s team, the sub contractors, and the community, the park reopened only 10 months after the ﬁ re consumed so much of it. 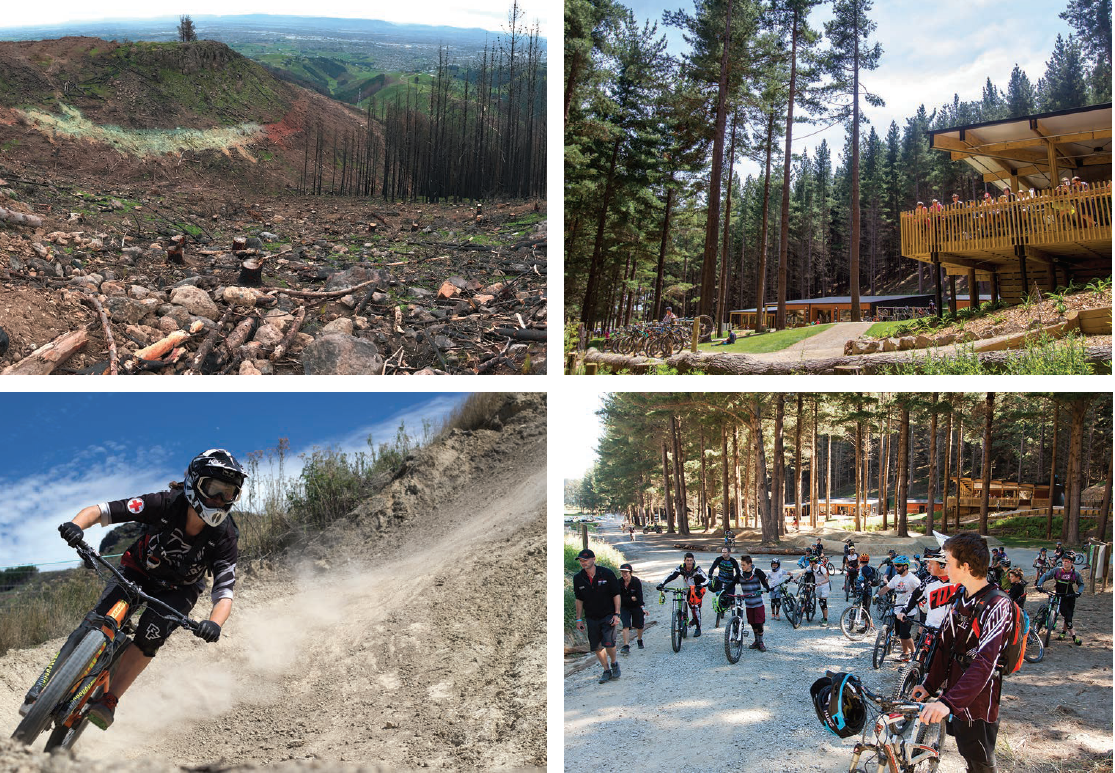 The fire ripped through two thirds of the forest, destroying all four ziplines and the chairlift’s massive haul rope. A new haul rope, was obtained from its Austrian manufacturer in record time, new ziplines were obtained from the United States and sixteen new mountain bike trails cut.

“The community has been hugely supportive. It was probably the community that got us through some of those tough times,” says Anne.

“We were also really fortunate to have such good contractors on site. The guys who helped build the park were really passionate about it and dedicated to rebuilding it -there was never any question about that.”

Since the Park’s re-opening in December, 35,000 mountain bikers at all levels have gone through the new trails and the zip-lines have been fully booked.

“There have been about 120,000 people through the doors since it re-opened. They’re really enjoying some of the new trails and people tend to forget about the ﬁre.”

Difﬁcult as it is to imagine a positive side to the all-consuming ﬁres, Anne says there is a silver lining.

“With large stands of pine trees now gone, the views at the top are stunning. I’d say there are now 280 degree views of Christchurch at the top—so you see Lyttleton Harbour, you see out to Kaikoura Coast, all the way out to the Alps right round to Lake Elsmere. You just would not get better anywhere in Christchurch.”