Hemp flour is not only gluten free but is also high in fibre, fatty acids, vitamins and minerals.

Masterton’s Breadcraft Ltd has been in the business of creating craft breads and bakery products for 75 years and the company’s sales and marketing manager Chris Petersen says its success can be attributed to its business philosophy.

“I think most of all its been about the company’s innovative culture We have always been a step ahead of the curve.”

By that Chris means the company is always looking ‘outside the box’ to challenge the standard of the somewhat bland bakery products produced in bulk quantities.

A recent example of this approach can be seen in the pioneering use of a flour derived from a source better known for its other uses.

When legislation was passed in November last year enabling the processing of Hemp seed bi-products on a commercial level Breadcraft Ltd set about using the flour, derived from the residue of the hemp seed oil extraction process, in wraps.

“The flour looks like fine poppy seeds in texture. It’s not a difficult process to create and we literally just replaced a portion of the normal flour with hemp flour, using the same plant and technologies we already had in our bakery.”

Hemp flour is not only gluten free but is also high in fibre, fatty acids, vitamins and minerals.

As such, it is an ideal source of nutrition for vegetarians and vegans.

“From an environmentally sustainable perspective the Hemp plant uses half the amount of water to grow than other flour crops.”

The Hemp flour wraps are part of a range of bespoke products Breadcraft Ltd makes including wraps made from milled Cricket flour imported from Canada, purple corn and spinach flour wraps.

Chris thinks consumer demand for these healthful products will only increase in time.

Currently the wraps, marked by Breadcraft’s Rebel bakery brand are available at Countdown nationally at supermarkets next to wraps derived from traditional flour sources.

The company was established in 1942 by the late Harold Cockburn, producing bakery and confectionery products.

By the early-80’s the group grew to 23 member bakeries.

Then in 1991, Breadcraft doubled its baking area and capacity with a brand-new plant capable of producing 35,000 loaves each hour. The company today is owned by Harold’s grandson John Cockburn.

Over 100 staff work out of Breadcraft’s Judds Road facility.

One of the factors that drew Chris to the company was its progressive approach, exemplified by a strong research and development stream. 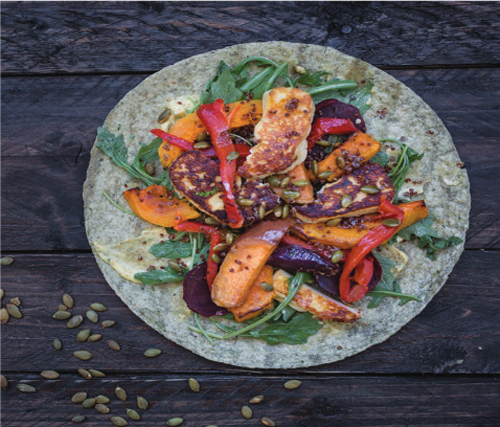 The Hemp flour wraps are part of a range of bespoke products Breadcraft Ltd makes including wraps made from milled Cricket flour imported from Canada, purple corn and spinach flour wraps.

“We are always looking at new products and new ingredients and we’re delighted so far with consumer response to our range of wraps. There’s definitely more awareness around eating well and healthy and that’s the market we will continue to focus on.”

Chris also says the team environment is very positive with clear pathways for budding new bakers to acquire baking skills as they progress their careers.

“Plant wise we are very advanced and our next focus is about research. We recently celebrated our 75th birthday, as part of those celebrations, the PM joined us along with a number of other dignitaries to open our new state of the art Tortilla plant.”