Fulfilling the vision at Golden Sands

Bay of Plenty developers Bluehaven Group are having a big impact on the region with the development of the master planned community Golden Sands.

Blue Haven residential sales manager Simon Paduch says the vision for the Golden Sands development in the coastal Bay of Plenty goes back to the 1990’s.

“The directors of the company had always had a vision of building a true community precinct, rather than just a standard residential subdivision and with these grand plans formed so many years ago, year by year that goal has become real,” he says.

“They started buying land in Papamoa over 25 years ago and set about designing a master plan including residential streets, lifestyle villages, parks and reserves.

“The plan also included shared facilities in the 6000sqm Excelsa centre such as retail, medical services, a three screen cinema complex and a variety of food and dining outlets.”

Bluehaven Group has completed the Golden Sands Lifestyle Village, home to 116 homes and when Business North spoke with Simon a second 76 dwelling village had just started being developed and a third project in the planning stages.

“We have designed our lifestyle villages with a particular resident in mind.”

“We built our top quality two-bedroom, one bathroom, single garage homes for owners in the 55-plus age group.”

Unlike conventional house and land packages or traditional lifestyle villages, Bluehaven Group has developed these sites squarely at the affordable housing end of the scale, making it possible for those seeking to join size and free up equity in a unique lease-hold arrangement. 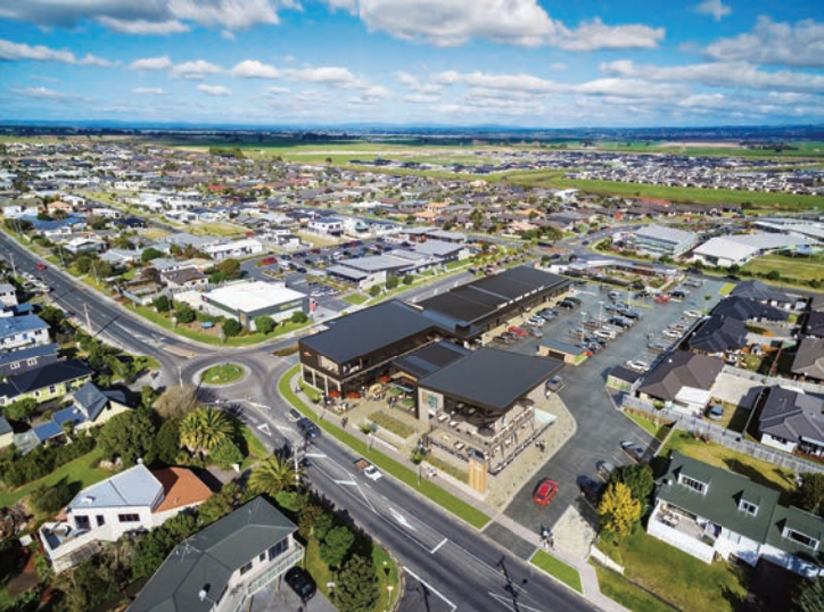 The Golden Sands Lifestyle Village is a master planned development at Papamoa.

Units typically have sold around the $200,000 price range, as Simon explains.

“The home is bought and owned by the resident, while the land the home is on is leased for a period of up to 30 years.”

He says often people are surprised to discover this leasing and land arrangement, assuming they are looking at a traditional retirement village complex.

Since then there has been considerable growth on numbers with Council projections indicating this trend will go on for many years to come, limited only by available land.

Bluehaven has a land bank which will enable further development for years to come.

Significant to this has been the civil infrastructure to access the suburb quickly and easily from The Easter Link and local road networks.

“I think one of the really outstanding characteristics of Golden Sands; is that it is not an homogenised community of housing and facilities.

“It has been designed to cater for a range of residential housing typologies from entry-level medium density homes to higher end free standing houses, thus forming a diverse community of residents in the process.”

Along with the residential enclaves, Golden Sands has its own decile 9 primary school and with a further Catholic integrated primary school planned the area will be well catered to cope with growth.

“It has been great to see so much careful thought go into the quality of life, with easy pathways for foot traffic and dedicated cycle lanes, encouraging residents in the area to rely less on motorised transport as much as possible.”

As far as plans ahead;, there is still a major town-centre project in the planning processes.

This precinct will create a hub for Gold Sands and the wider Bay of Plenty community with ample space for employment zones where businesses and offices can operate alongside retail, community facilities, bespoke eateries, plus much more.

“It was always intended that Golden Sands would offer places for people to work in rather than just reside in so this next stage will really impact on the area in a very positive way.”

Special features of the master planned community even extend to the way reserves and open spaces have been designed, with a priority to see each one as unique.

“At Bluehaven we have embraced an integrated ‘line, work, learn, play’ planning philosophy that has helped Golden Sands mature into a friendly, walk-able community.

“It is a fantastic community to be part of and watch develop.”