The Black and White Coffee Cartel concept is loud and artistic.

Full of personality – eccentric and loud – The Black and White Coffee Cartel has just opened its fifth café in Christchurch with the promise of many more to come.

Fresh from the café’s gleaming black and brass micro-roaster, the inaugural cup was poured in Black and White Coffee Cartel’s first café in February 2015.

Since then, using the franchise model to expand, there has been a relentless stream of Black and White Cafés with owner-operated shops opening their doors in Bush Inn, The Crossing, High Street and Oxford Terrace.

Another four cafés – Lichfield Street, Winston Avenue in Papanui, Plymouth Lane in the CBD and one in Rolleston – have had their leases signed-in and will be built this year.

Shops in Queenstown and Lincoln are likely to follow shortly after. Heading the Black and White Coffee Cartel is entrepreneurial managing director Bink Bowler.

With a background in roasting, grinding and making good coffee, including testing the café waters in the capitol city for spell, the idea of a cartel of coffee houses came to Bink around 2014.

Returning from overseas, Bink says the inner city was looking devastated post-quake so he and brother Luke got together with Reuben Thorne – ironically from ‘All Black’ fame – and saw opportunity to launch a new brand of cafe on multiple sites.

The Black and White Coffee Cartel was born. Their first offering in Victoria Street was the first of the ‘new notable’ cafes to hit the ‘new Christchurch’– a strong focus on good coffee and simple cabinet food.

“Keep it simple – keep it black and white we say. My feeling is that cafes are there to drink coffee and have pastries – so our model is focused on traditional café offerings that allow the eccentric personality inside the shop to shine; the coffee and good basic cabinet food – the easy stuff that people want.”

Bink says café’s are extremely artistic places to create – the minute you put a cookie cutter approach to it you fail miserably.

He likens it to music albums, using Michael Jackson’s ‘Off the Wall’, ‘Thriller’, and ‘Bad’ as examples. Three very different albums – but they all have the Michael Jackson essence. “It’s the same with cafes. We tailor the establishment for the market.

You have to let businesses embrace their own personality and Black and White Coffee Cartel has found its own personality—so it will go where it goes.”

The Black and White Coffee Cartel concept is loud and artistic, a reﬂection of Bink’s own love of grunge coffee shops and passion for art. Not a bare white wall in sight; the walls are covered in an eclectic mix of art, often procured from op-shops.

Micro-roasting is another key feature of the Black and White Coffee Cartel personality with beautiful black and brass roasters taking pride of place in every shop.

“Traditionally, if you were to buy into a coffee franchise you have to buy roasted coffee beans from the franchisor,” explains Bink. 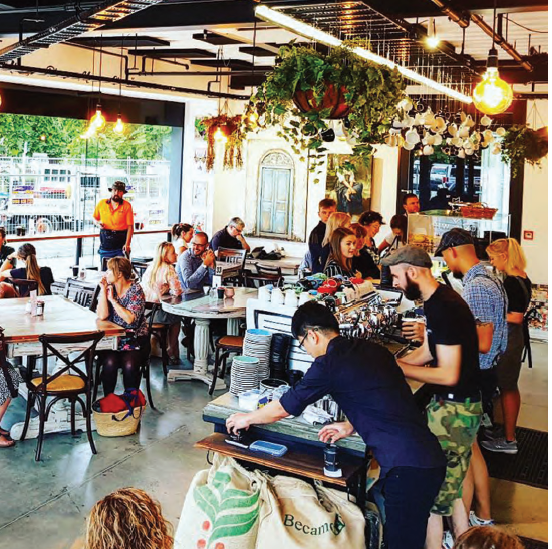 The Black and White Coffee Cartel has a strong focus on good coffee and cabinet food.

“With our model, you buy green coffee beans direct from the importer and roast them yourself. “ Bink says the speed of expansion has been surreal and there has been no time to celebrate.

But he says while it is a big business now with multiple locations, Black and White Coffee Cartel remains an independently owned local business and the cafés are very personal places.

“We’re very hands on and there’s no cookie cutter approach. When I’m opening a cafe I handpick the artwork and furniture. I do the design in my head and I still roast and pour coffee.”