The next level in manholes

Steve McDonald: “We have a durable product that brings real value to New Zealand infrastructure.”

“Concrete manhole chambers have inherent weaknesses that can lead to leaking or failure over time. By eliminating these weaknesses we have a durable product that brings real value to New Zealand infrastructure,” he says.

AML’s technology comes from ROMOLD GmbH, a German subsurface chamber manufacturer that has been in the industry for close to 30 years.

Steve says that because the ROMOLD injection moulded manhole chambers are among the best quality plastic manhole chambers available world-wide they bring a lot of already validated technology to an emerging market such as New Zealand.

Manhole chambers are used on gravity sewer and stormwater systems so a big part of AML’s growth has depended on educating Councils, engineers and drainlayers as to the benefits of the product.

Steve says that ROMOLD manhole chambers have many advantages over traditional concrete chambers providing benefits for all stakeholders.

“ROMOLD manholes are inherently durable, they will not corrode, erode, crack or leak.

This decreases maintenance costs for Council and ensures a long 100-year asset life.

As they are lightweight they can be installed with smaller machinery.

“The chambers are prefabricated requiring no confined space entry, which when combined with the reduction of lifting loads makes for a much safer product on site.”

Importantly they can be installed much faster than for a traditional concrete manhole chamber, three times faster in fact, which allows for greater efficiency in the drainlaying process and earlier delivery of the project for the client.

“The efficiencies gained at installation allows for a finished manhole chamber at a price competitive with the traditional concrete option.”

He says that in the four years since launch AML has steadily seen a growth in the adoption of its manhole technology with the majority of New Zealand Councils now accepting ROMOLD manholes into their network.

“Chambers have been installed from Kerikeri to Queenstown, in everything from land development, industrial, renewal, and Council infrastructure projects. What helps to make it a satisfying business is the feedback that we get from site. Contractors call it a ‘no brainer’ as the technology ticks all the boxes and makes their life a lot easier,” says Steve.

He says that a recent project in Hastings saw a ROMOLD manhole chamber being installed on a large live sewer line under a busy roadway.

“The crew needed to stop the sewer flow for only 45 minutes during connection of the manhole and had the road open for traffic the next morning. This simply couldn’t have been done with a concrete chamber and saved the project thousands of dollars,” says Steve.

Launched in 2015 AML is a family owned business directed by Steve and Shelly McDonald who are based in Kerikeri, Northland. 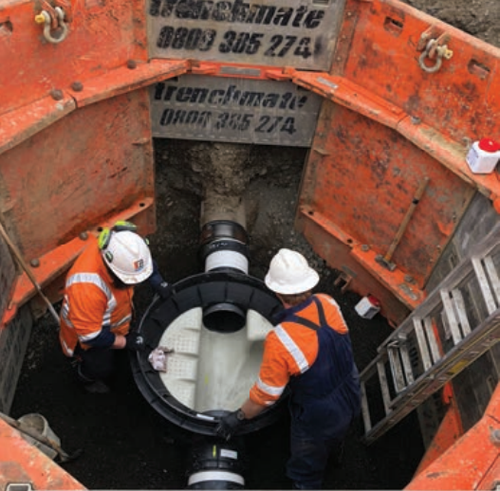 The company was recently one of the five winners of The Pick:19, a Northland business accelerator programme.

Steve says The Pick has helped to create market awareness of the product.

“Our goal is to see this technology being employed for the benefits that it provides to New Zealand infrastructure. We feel that it is the right technology, made the right way, for the right reasons. ROMOLD manhole chambers should be the go-to solution for use on plastic pipelines.”