Apartments a stone’s throw from CBD

The Alex apartments will total 52 apartments with one to four bedroom options. Owners are scheduled to receive their keys in December 2020.

As the first residential development at the Gorge Road Special Housing Area, The Alex apartments are changing the face of what is predominantly an industrial part of Queenstown.

The Alex is located near the junction of Hallenstein Street and Gorge Road, and Craig McConnell, from the project’s main contractor Acium Construction, says its advantage is the seven minute walk to the centre of Queenstown’s CBD.

“Most of the accommodation has gone out to the suburbs, Frankton, Lake Hayes, and Jack’s Point,” he says. “The Alex is residential in the city centre. If you’re working in the city you can walk to work and that’s a big advantage.”

Although the Special Housing Area zoning allows for the fast track of residential projects, commencement of construction of The Alex has faced its share of delays.

The design and build of The Alex was initially awarded to Arrow International, but when that company went into liquidation, Craig’s client had to find and engage new specialists. Craig’s name was put forward by a mutual associate for the residential build component of the project.

Craig had worked in Queenstown for about six years prior to the GFC, then worked for three years in Invercargill. After the February 2011 earthquake, he went up to Christchurch on a short term contract, became an accredited contractor for EQR and stayed for nine years.

He hadn’t intended to return to Queenstown but the opportunity to manage the build of The Alex has coincided with the Christchurch market slowing down, so he decided to go where the work is. The podium level of The Alex is a set of six retail shops at the street front.

Acium Construction is completing aluminium joinery, fit out, and shop fronts at this level.Two levels of apartments will sit on top of these shops, and behind these, a basement car park and pedestrian area.

Three levels of apartments at the rear will sit in an open L shape to the front, making a total of 52 terraced homes with one, two, three, and four bedroom options. This is a larger scale project for Acium Construction, which has previously managed the build of 10 apartments.

Craig’s advantage is that prior to starting The Alex he had just completed a $7.5 million private school build at Rangiora, so much the same in terms of scale. 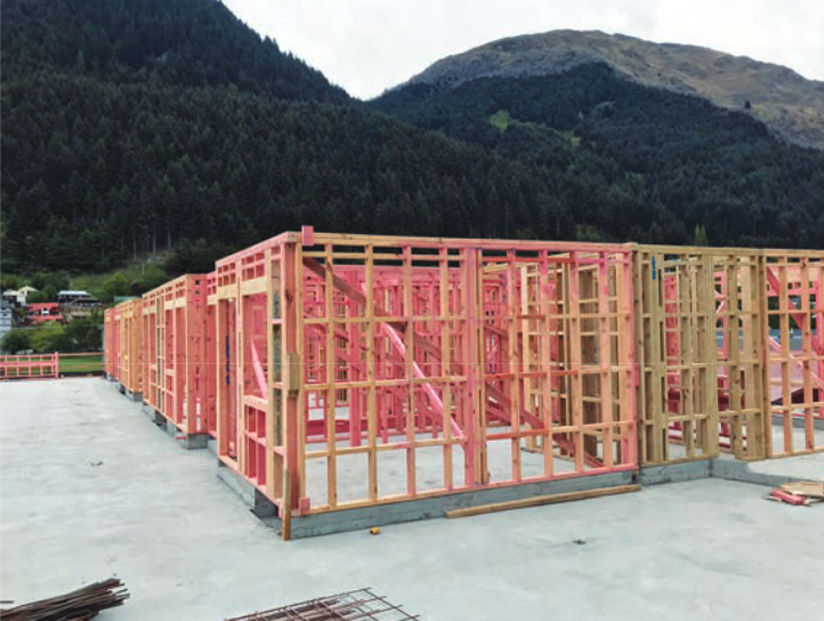 The extremely tight site has very limited set down space and parking areas, and he feels the logistics of getting materials onto site and up to the required levels with such little room to move will be one of the biggest challenges.

Instead of employing 15 builders himself, of which there are few available, Craig decided to engage a small building company, Manpower Construction, for a similar cost. “Instead of running around after 15 builders, I can conduct the build better by concentrating on everything else,” he says.

“There is a lot of normal stuff that needs to be done like standing up frames and trusses and exterior cladding, so Manpower Construction can handle those aspects, then I’ll use about half a dozen of my own staff to do the more technical aspects like the acoustic flooring and forming internal gutters.”

The majority of subtrades are all coming in from Christchurch, including PBI Electrical and, due to the size of the project, Hunter Plumbing and Peter Diver Plumbing and Drainage are both working together. Owners of The Alex apartments will receive their keys in December 2020.

Tags:
Previous Article
Lake views just the thin end of the wedge
Next Article
Commercial opportunities on the rise