So they loaded up the truck and moved to… Otorohanga

The big move: Michael and Susie Woodward loaded up and ready to move to their new Waikato base along with family Kylie, Charlie, John and Jack.

It has taken many years for Michael & Susie Woodward to realise the right time to commit to a major move of the best of their A2-tested stock, family and possessions, from Canterbury to South Waikato, but on ‘Gypsy Day’ 2019, that ambition became a reality for the couple and their four children.

The whole move process took nearly a week with the stock loaded on to trucks that had carried other stock down south. In total the Woodward’s brought 250 dried off cows, 60 empty carryovers, 50 Angora goats, 100 in calf heifers and 16 bulls north to the Waikato.

Their tentative interest in the Waikato came when they viewed a farm near Michael’s grandparents in Tirau, however the numbers didn’t stack up, so with some degree of patience they waited for the ideal farm to present.

“We looked at this farm, south of Otorohanga, in December 2018 while up this way on our holiday between Christmas and New Year. It’s located 10 minutes due South of Otorohanga on the border where dairying comes dry-stock on the hilly country toward the King Country,” says Michael.

Their farm is fully self-contained and is 170 ha (150 ha effective) in size, with pockets of native bush.

“Our intention was to always go fully self-contained to make the farm really work for us. We also wanted a property with a bit of character,” says Michael.

When the couple stepped on the farm they could identify those parts that would need to be upgraded in time, with the first major investment in a snap chiller in the milking shed. The existing effluent pond was tested to ensure it met compliance and will service the farm for a few more years.

The couple milk 320 A2 cows and made the decision to milk full season once a day. Along with the milk producers the couple also run 300 Angora goats. Michael’s family in Pukekohe were previously Angora goat farmers.

The intention all along was not to need to employ any other staff on the farm. In the early days the herd, once up in the Waikato, was hit with Theileria, a blood-borne parasite, mainly transmitted by ticks, that affects cattle.

“It hit us quite hard in the middle of calving so production was down on what we had originally forecast. Today, cow condition is good and we’ve had our best mating season with 86% six-week in calf rate.”

Susie’s passion is around genetics and this year she mated their kiwi cross herd to mostly Viking Red to achieve a three-way cross for hybrid vigour and a focus on udder health.

Subsequently a few non-performers have been culled out of the herd. At the end of the current season Mike expects milk production to have dipped by 15%. Due to the drought in the Waikato, the herd is fed approximately 90% silage and .5kg of meal through the shed to get zinc into the cows for facial eczema prevention.

The farm supplies their A2 milk to Synlait and in December hosted a SMASH group (Smaller Milking and Supply Herds), focusing on equity growth and Once A Day milking.

In March, Michael was still hoping for the Waikato rain that has been forecast to eventually fall which will determine when dry-off commences.

“The herd is managing the once-a-day milking well at this time, we just need some more grass.”

Planned start of calving is August 1 and it’s a case of experiencing whether this time-frame works for the farm.

Outside of the farm, Michael is chair for the NZ Dairy Industry Awards Executive Committee. It’s an organisation they are both passionate about and a way to give back to the industry that has served them so well.

When NZ Dairy spoke with Michael, the regional awards dinners were about to get underway with the Central Plateau region the first one scheduled.

“The Committee’s role is to make sure that the awards remain relevant. Making sure that entrants are being judged consistently and in relationship to current best practice.”

The awards culminate with the Nationals to be held this year in Auckland on Saturday, May 16th.. 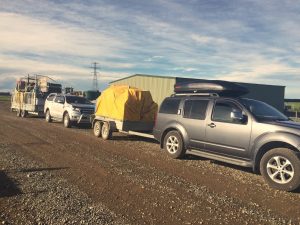