Seven trailers joined together - 30 axles and 240 wheels in total - were backed underneath the plant then hydraulically raised, lifting the plant off the stools.

Shifting house is never an easy process, but when it involves physically moving a 270-tonne gold mining plant the equivalent of three storeys high, it takes on a whole new level of meaning and complexity.

Such was the case when northern Southland gold miners Waikaia Gold Ltd uprooted their plant, lock stock and barrel, hauling it from the Waikaia ﬂood plain mining site to its new location ﬁve kilometres down the road.

Mining gold near the Waikaia River since 2013, the company has completed Stages 1 and 2 of its operation, mining a 4.5 kilometre strip of land towards Waikaia, between the Waikaia River and the Riversdale-Waikaia Road.

Mine general manager Noel Becker explains that the gold is contained in an old riverbed 15 – 20 metres below the surface.

In order for the ancient riverbed to be mined, the overburden silts and gravels, which do not possess gold, had to be removed. Rob says between 240-300,000 cubic metres of overburden is extracted each month.

“We employ a sub contractor to remove the overburden, leaving a hole in the ground with ground water at the bottom that we ﬂoat our plant in.

It’s just a continuous process moving the hole up the valley. “We dig away at the front of the pond and the plant keeps moving forward on that minepath.

“We might be digging a metre a day – on some days when there was a narrow mine path we were moving 2.5-3 metres a day.”

Stage 3 meant a return to the mine’s start point, but on the other side of the busy Riversdale-Waikaia Road, near the Garvie Burn (Muddy Creek) tributary.

In simple terms it was a matter of lifting the plant out of one hole, digging another hole down the road, moving the building there, dropping it in and restarting operations.

But of course, it wasn’t that simple; the devil is always in the detail and 12 months of meticulous planning and preparation preceded the actual event—exorcising any hint of the devil come the day of reckoning. With the plant being 26 metres long, 12 metres wide and 10 metres high it was too wide and high to go on the main Riversdale-Waikaia Road. 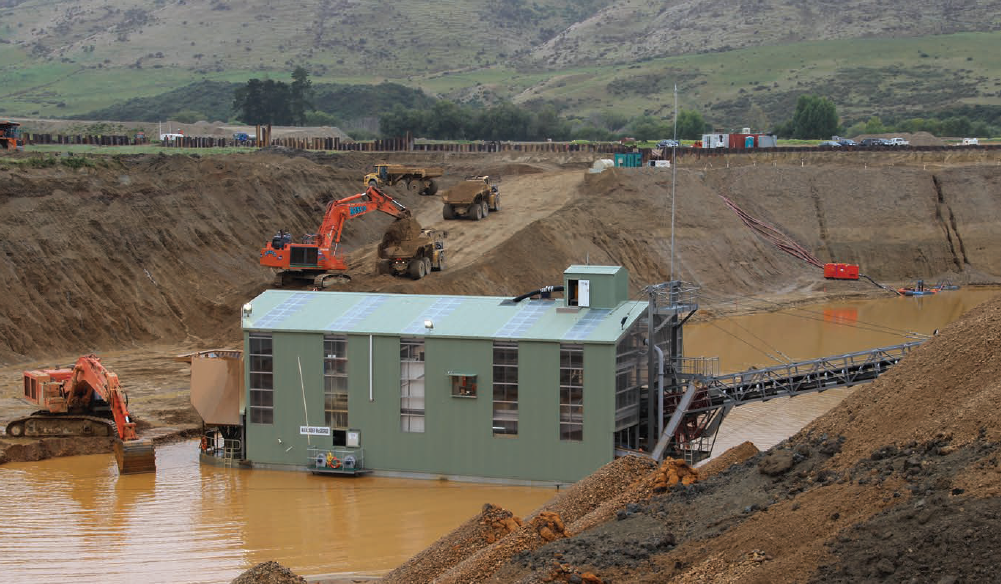 Waikaia Gold has been mining on the flood plain near the Waikaia River since 2013 and has completed Stages 1 and 2 of its operation.

A decision was made to widen and improve the road developed for haulage on previously mined land. The preparation was in getting everything right,” says Noel.

“There was a lot of to-ing and fro-ing between ourselves, the contractor and mining engineers, the structural engineers and roading engineers.

The ﬁrst part of the operation was getting the plant, which floats on a pontoon 15 metres below surface level, onto a 240-wheel trailer to enable it to be transported to its new destination by Auckland transport specialists, Tranzcarr Heavy Haulage Ltd.

A series of pads were built on which metre high stools were placed for the plant to sit on. A steel carrying frame was placed on the stools to help spread the load and mitigate against the possibility of the pontoons crumpling.

“We had to ﬂood the hole to raise the plant up by about 6 metres to bring the pond 9 metres below surface and that was high enough to ﬂoat the plant over the stools,” says Noel.

“ The water was then pumped out of the hole, lowering the plant down onto the stools, until it was all dead dry.”

That accomplished, seven trailers were joined together – 30 axles and 240 wheels in total -backed underneath the plant then hydraulically raised, lifting the plant off the stools.

Four of Tranzcarr’s trucks, along with a dump truck owned by local ﬁrm Rosco Contactors, hauled the plant out of the hole, which had a 1:11 gradient. 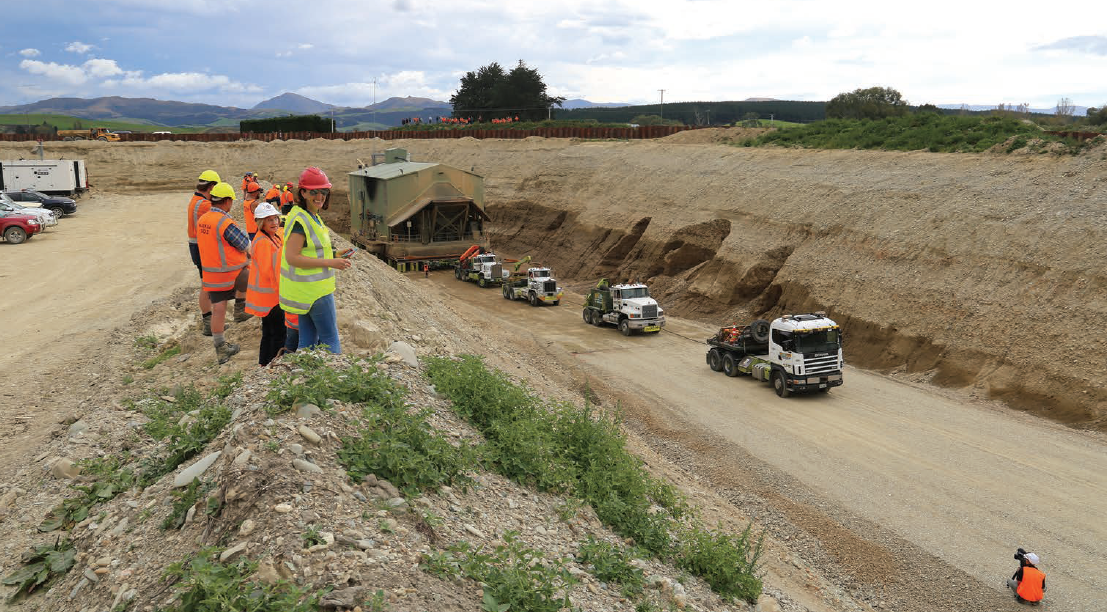 Four of Tranzcarr’s trucks, along with a dump truck owned by local firm Rosco Contactors, hauled the plant out of the hole, which had a 1:11 gradient.

Out of the hole, two of Tranzcarr’s trucks were able to haul the plant on its 5 kilometre journey, where a new hole had been dug, and the process was reversed to reﬂoat the plant on its pontoon.

“With the amount of detailed planning that we had put in, the entire thing went exceptionally well,” says Noel.

“We stopped mining Stage 2 on the 10th of March and started mining at Stage 3 on the 5th of April, so it took three weeks to complete the shift,” he says.

“The actual trip took 4 hours to complete, the rest of the time was spent in pumping the water up and down.”

Noel says that while there was a huge cost in moving the plant, the alternative would have been to have dismantled and reassembled the plant in sections; a process that could have taken up to 6 months end-to-end, and cost considerably more in lost income.

Five years into a seven-year gold mining project in the area, Noel says the company is uncertain whether there will be a Stage 4.