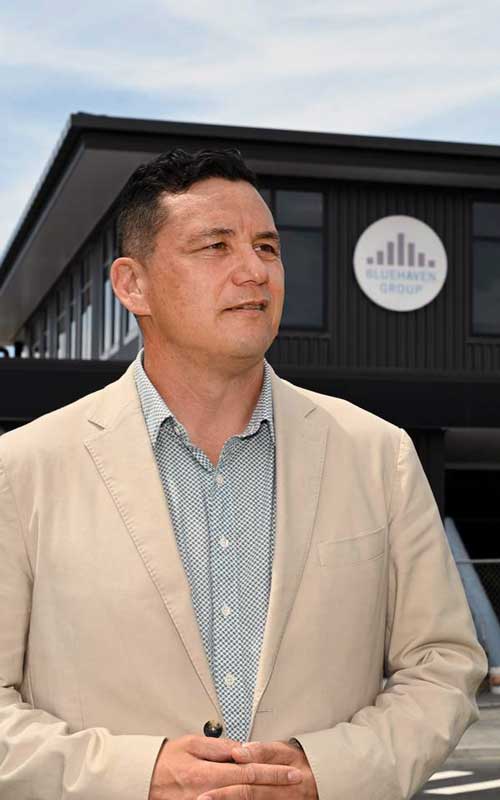 “As a result, we build communities that are great places for all to live, work, play, learn, restore and ultimately belong,”

He says that Bluehaven focuses on delivering a range of housing typologies to the market, suitable for all stages of life from first homebuyers to retirees. This means that people can continue to live in the same area their whole lives and in doing so create strong community links.

He says Bluehaven Group has always been committed to extensive master-planning processes to ensure design excellence in its land and property developments.

“As a result we build communities that are great places for all to live, work, play, learn, restore and ultimately belong,” he says.

The company’s signature development Golden Sands is a good example of the philosophy. Nathan says the area has been developed with a multi-modal approach to connect the community and its people.

Entering the development, streets are carefully networked in a pedestrian, cycle and scooter friendly way to allow for safe commute, and also complement both vehicular and public transport options. He says this careful planning ensures less reliance on vehicle dependency.

There are a multitude of reserves to accompany the pristine Pāpāmoa Beach and Wairakei Steam reserve corridor. Nathan says that the carefully designed areas help to facilitate where people can meet and enjoy the space, and include playgrounds for different ages, exercise areas, community gardens and respite areas for those quiet times.

Commercial development is also part of the mix to ensure a totally liveable environment. In Golden Sands the Excelsa Centre, which was undertaken in three stages, was completed in 2020. This mixed-use development is one of the largest and newest coastal developments in the Bay of Plenty and acts as a vibrant hub for the coastal belt.

Nathan says the centre is unique in that it has ocean views, and it is only a two-minute walk to the beach. All the businesses in the hub are locally owned and operated, which he says is important.

Bluehaven Group is currently in the process of constructing the Whitiora Health Centre, located on The Boulevard, in Golden Sands.

Nathan says the centre will provide much sought-after health services to the growing community with the project scheduled to be completed and open by mid-2022.

He says that Golden Sands is testament to Bluehaven’s continued focus on establishing developments that have a strong people emphasis, with a vision to foster healthy, sustainable communities.

A new billion-dollar town centre planned for Pāpāmoa East will help to cater for the huge population growth tipped for the region, says Chief Executive of Bluehaven Group Nathan York.

Spearheaded by Bluehaven, The Sands town centre will include 232,000sqm of new commercial space and surrounded by 11,000 new homes.

The Sands will also include an aquatic centre, a regional health hub, substantial residential stages, a retirement village, and several commercial precincts, including offices, supermarkets and retail outlets.

“The heavy lifting is done. We have acquired the land, master planned the site, have recently received the land-use consent and we have confirmed our first commercial anchor tenant,” says Nathan.

However, there are still hurdles to overcome, he says, primarily the fact that the Pāpāmoa East Interchange, connecting the Tauranga Eastern Link (SH2) to the Wairakei and Te Tumu development areas, must be built first as around 80% of the development is locked down until this is operational.

Bluehaven believes there are an additional 11,000 homes available for development out east including 3000 in Wairakei, 6,000 in Te Tumu and an extra 2000 in the proposed Bell Road development which is a new extension to Wairakei. It estimates that the Town Centre project will create an estimated 15,000 jobs – half during construction and half permanent.

Subject to the Papamoa East Interchange opening in 2024, The Sands’ first stages were planned to open in 2024. Nathan says it will be one of the largest commercial projects for the Bay of Plenty in decades.