Back to the future for orchard manager

In 2018, when Andrew Forward was browsing Trade Me looking at management positions he applied for the orchard manager’s position at Waipopo Limited Partnership with no real expectation of getting it. 18 months later he’s leased his small orchard in Hawke’s Bay to a friend, rented his house out, and is thoroughly enjoying managing 80 or so hectares spread over three orchards in South Canterbury.

Although he grew up on a family orchard, he’s a mechanic by trade and his new position’s focus on pipfruit brings Andrew in a rather surprising full circle.

“I’d done a lot of work with apples and stonefruit in the family orchard growing up as a kid around 10 or 11 years old and hated it. Then I went back to help my father in ’83 just as an orchard worker and after a year or so discovered I actually enjoyed the work, so when the manager left I started as assistant manager and things went on from there.”

Andrew worked in partnership with his father, Jack, with 32 hectares of land they either owned or managed for several years including his own first 8 hectare block of bare land which he developed into an apple orchard.

In the 2000’s, when Jack retired, Andrew had the opportunity to buy the balance of the orchards but as he explains “at the time the industry wasn’t very good so I didn’t want to take the risk of borrowing a whole heap of extra money to purchase the rest of the blocks. So we sold all our orchards and exited the industry.”

A few years earlier Andrew had started a small horticultural contracting business which he now expanded. He’d already had involvement in the wine industry with what was then Montana and as that steadily grew the business expanded to supply labour for pruning, thinning, packhouse work, harvesting and so on for pipfruit in Hawke’s Bay.

The vineyard work went as far south as Central Otago and progressed onto Marlborough as it hit an intensive period of development.

“I got set up early as an RSE (Recognised Seasonal Employer) and around then I had 165 overseas workers and another 50 locals . By 2013, with a lot of newcomers entering the Horticultural Contracting market Andrew wound up his company and turned his attention to the two small blocks he’d recently started developing with a focus on modern planting techniques, particularly with their dwarf apples. 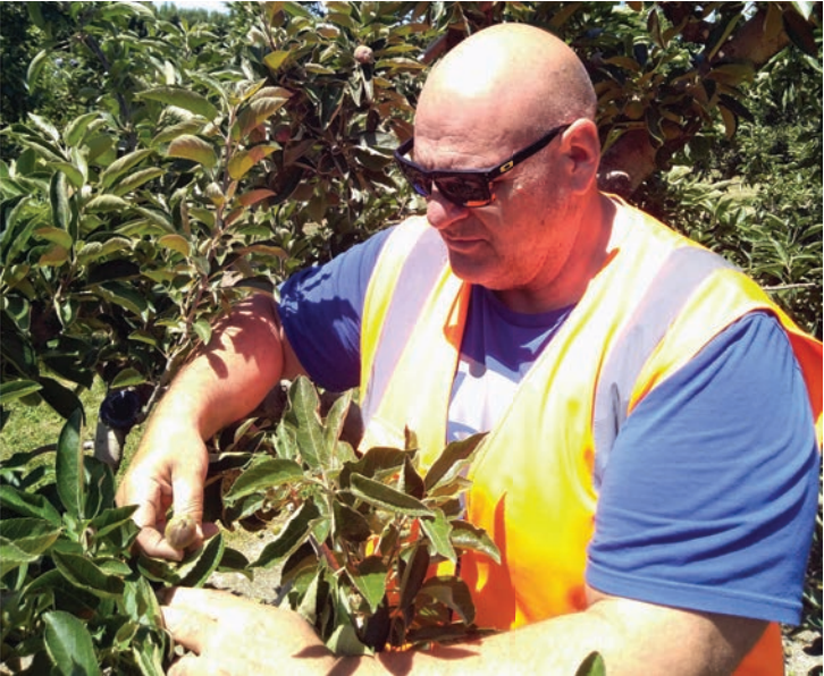 Fast forward a few years and Andrew’s enjoying combining his love of growing and producing from the land with the latest planting techniques and technology in his role as orchard manager.

The North Island investment group making their first foray into horticulture bought the Waipopo Orchards, now known as the Waipopo Limited Partnership, in 2017 and they’re putting Andrew’s knowledge, experience and understanding of today’s market to good use.

They’re the second largest grower of Honey Crisp apples in New Zealand. It’s a variety grown mainly in South Canterbury with some in Central Otago.

As Andrew explains “It’s probably the most difficult apple to grow but, along with Rocket which is grown in Hawke’s Bay, it’s the highest paying variety grown in New Zealand with all fruit exported to the United States. Americans just love it.”

With 17 hectares of bare land lined up for planting in the next two to three years Andrew’s looking forward to putting in some new apple varieties as well as some newly developed pear varieties, all likely to be in a two dimensional system rather than the more traditional three dimensions. “It’s an espalier type of tree form which we’re going to see more and more of in the next twenty years,” explains Andrew.

“It means we can go into platform harvesting and even in the long term look at the robotic harvesting machines which are now in development. We think labour’s going to be a real issue in the future, and this system’s a lot more efficient plus they’ll let us reduce chemical use because the canopy’s so much smaller and shaped more like a hedgerow.” Andrew would like to see more young people coming into the industry which he believes has a lot to offer.

“We’ve got a shortage of experienced managers in the cherry, apple and kiwifruit industries. A young person with the right training can earn six figure salaries and there’s the deeper satisfaction of starting with a piece of bare land and turning it into something productive as well.”