Larger farm opens up economies of scale for Pahiatua couple

It’s been about 18 months since Simon Beech and his wife, Kelly, bought Surreydale farm from their neighbours, Arthur and Sara Waugh, who’d put the farm together over more than forty years.

The Beech family themselves have been farming in Pahiatua for five generations with Simon and Kelly now working in partnership with Simon’s parents Martin and Philipa.

They sold the two blocks they farmed either side of Pahiatua as a way of consolidating into a single, larger farm.

“We went from 1000 hectares effective to 1700 effective from 2000 hectares so now we’ve got the scale and we can run the type of farm we want to,” says Simon.

“We were breeding and trading before and now we’re running 9000 ewes and 400 cows, and all the progeny’s sold to store.”

“We try to keep it as simple as possible,” Simon explains, “but we aim to get as many lambs and calves from the animals as we can. It’s about get-ting the basics right really.”

With Simon’s parents now retired in Pahiatua Simon and Kelly have a full- time worker and two casuals to help them run the farm.

They run a Romney- Coupworth flock because they like combining the fertility and mothering instincts of the Coup-worth with the structure and size of he Romney.

“The ewes are rotated most of the year and then at weaning we get rid of a third of the lambs, with another third going a month later and by March- April all those store lambs have gone. We send them all out the gate at an average of 30kg.”

They had to buy in 4000 ewes with a variety of genetics to stock the larger farm and they’re working on achieving the 135% lambing average they had before they moved. 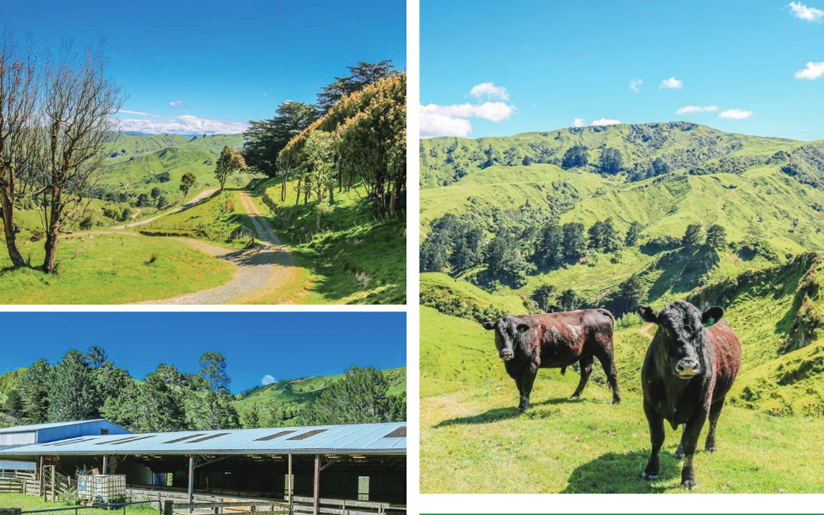 Pahiatua’s Simon and Kelly Beech have consolidated their farming operation with the purchase of Surreydale Farm, increasing their business platform to 1700 hectares (effective). “Now we’ve got the scale and we can run the type of farm we want to,” says Simon.

Last year they did 120%. “We’re putting everything to a Romney-Coupworth ram so they should be better already this year,” says Simon.

The cows are spread out, set stocked all year round except for mating. For the weaners, they’ve subdivided the pasture into three-four hectare paddocks.

“All the weaners go into their own block after weaning which they’re rotated round every two to three days for the winter so we make the most of the pasture to get the best growth rates out of them we can.”

They sell the steers in the spring aiming for a weight of 300kg and the culls from the heifer calves in December.

“We run an Angus-Hereford herd so we keep the black or black and white calves to maintain the hybrid vigour,” says Simon.

Environmentally they have fewer issues than many due to the class of land they’re farming.

“We’re hoping that the way we farm, the systems we use, and the sort of land we’re farming on means we won’t be overly affected by all the new policies coming in,” explains Simon.

For now it’s about taking care of the land itself.

“The Waughs had put 300 hectares of native bush into QEII and we’re continuing that with letting the gullies regenerate. We’re also working with the Horizons Regional Council and planting poplars to keep stabilizing the hillsides.”

Simon and Kelly’s children Ian (8), and Sophie (6), have enjoyed the move to the new farm tucked up under the Waewaepa Ranges.

They’re both into their hunting, enjoy the outdoors and are happy to help out with the lambs when needed.

For Simon and Kelly their goal is as simple as their approach.

“We’re still learning with this new block and we aim to take it to the full potential that it’s got.”

Tags:
Previous Article
Farm gifted to church a holiday haven
Next Article
New name but decades of experience behind team