Sam Mallard admits he was as green as grass when he started working on a Canterbury dairy farm while backpacking around New Zealand in 2006.

English by birth, Sam is now managing two dairy operations for Align Farms with his fiancé Tracey Thomas, milking nearly 1700 cows.His original experience was an eye-opener and gave him a taste for more, Sam says.

“I really enjoyed it so I went back to the UK and went to university to study dairy farming.” “I had never done dairy farming before, I was born in a city.

“While I was at university in England studying how to be a British dairy farmer on a completely different system, Rhys Roberts who is now the general manager of Align Farms offered me a job in New Zealand.”Consequently Sam returned and started on the bottom rung of the ladder in 2010, again in Rakaia.

“I worked my way up over the next five years to managing a farm of 1550 cows for the Heneghans.” From there he moved nearby to work at Emilius, a newly converted Align Farms dairy business inland from Ashburton.

Today, Align Farms comprises five farms and Sam now manages both Emilius and Jacawanda which neighbour each other.Emilius, 172 ha, supplies A2 milk to Synlait from 710 cows milked through a 60-bale rotary with cup removers and in-shed feeding.

Infrastructure includes a calf and implement shed, water system and a 60,000 cubic meter irrigation pond.Sam and Tracey took over the management of Jacawanda in May 2018; seven staff are employed across the two farms.

The 249-effective hectare property is a grass-fed only farm and milks 950 cows through an 80-bail rotary shed; Jacawanda receives a premium for supplying milk for Munchkin grass-fed infant formula.

Before Align Farms purchase, it was 420 effective hectares milking 1600 cows and in 2014 it was divided into the now two separate farms.Last season’s total production for Jacawanda and Emilius was respectively 365,000kgMS and 323,000kgMS, although Sam’s focus is margin on milk rather than per cow or per ha production.

Emilius receives a premium for the supply of A2 milk; both farms qualify for Synlaits’ Lead With Pride programme which focuses on best practice environment, animal health and welfare, milk quality and social responsibility.

With just one season behind him on Jacawanda, Sam is still getting to know the finer points of the property, however Emilius has been a good base to work from, he says.

He and his staff have been keeping track of where they believe any production was being lost on the two farms and “trying to hit home runs on all of those the following year.” 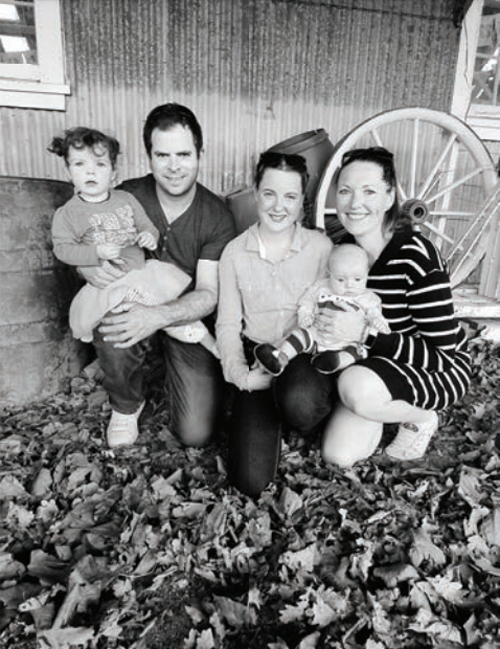 “I grew up on a farm but when it came time to getting a job and leaving home, unlike the rest of my siblings, I went away from farming and decided a warm office was more inviting,” Tracey says.

However, once she met Sam she was drawn back to the rural lifestyle, swapped her high heels for gumboots and considers herself to be fortunate to be at home with her children full-time.