Shorthorns tick all the boxes for Tocker brothers

Shorthorns are a favourite of the Tocker brothers and 20 per cent of the herd is made up of milking shorthorns, the balance a mixture of friesian and jersey.

Meet the Tocker’s, a Manuwatu family with a passion for shorthorn, New Zealand’s oldest cattle breed introduced more than 200 years ago.

Jerry and wife Ireen along with sons Russell and Zac milk 700 cows on 400 hectares a few kilometres at Tiakitahuna bordering the banks of the Manuwatu River.

The farm is a combination of a dairy and dry stock unit in which Russell, 26, and Zac, 28, are equity partners.

“It’s our first step up the ladder,” Russell says. The dairy herd’s beef calves are fattened on the property, along with up to 800 lambs bought as trading stock as each season dictates.

Cattle are all spring calved; the dairy herd is milked through a 40 a-side herringbone shed, a job which takes four hours during the spring peak as the shed was originally intended for 400 cows before the addition of 200ha to the farm in 2013.

“The neighbour’s property came up for sale and we bought that and so we just work with what we’ve got. It’s quite a modern shed.”

Many farmers had a tough season throughout New Zealand because of both wet spring conditions and a very dry summer and the Tocker’s were no exception.

In order for the cows to maintain condition during summer, the Tocker’s were forced to go to 16 hour milking from Christmas until the end of the season. Because of this and the wet spring, overall production averaged just 280kgMS per cow instead of the usual 330kgMS in the low input system.

Next year the family will celebrate 100 years ownership of the original 27 hectares bought by Russell’s great-grandfather Leonard Dampney in 1919. “My father’s been there since the mid-seventies. He took over from his uncle.”

Twenty percent of the herd are milking shorthorns which have a bias towards milk genetics, and the balance a mixture of friesian and jersey. Shorthorns come in three colours, red, white and roan – a mxiture of red and white.

“The shorthorn’s are me and my brother’s favourite ones. They are a docile cow, easy to milk, easy to look after, they’ve got good fertility, good milk production; they also give you a good beef calf as well.”

They also have a great temperament and are high milk protein producer, he says.

Because of the brothers’ penchant for shorthorn, they have increased their number from about 20 to 150 with the aim of having 50% shorthorn in the dairy herd in the next five to 10 years. 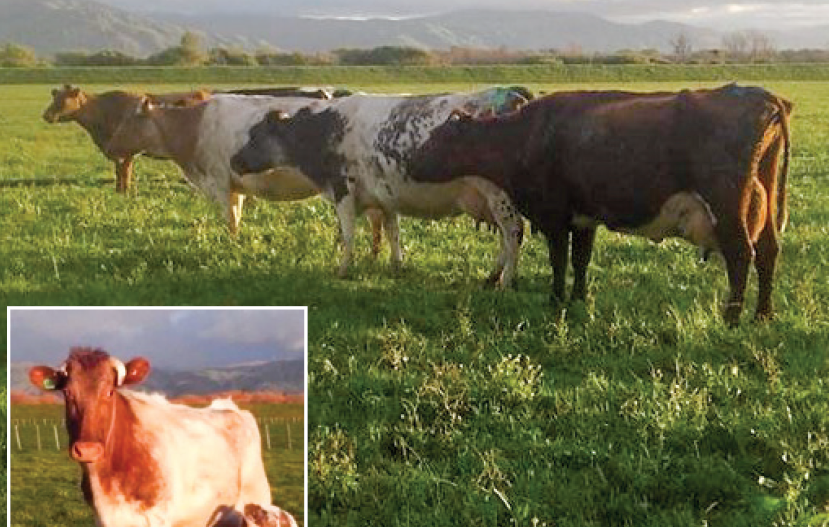 Shorthorns are a favourite of the Tocker brothers and 20 per cent of the herd is made up of milking shorthorns, the balance a mixture of friesian and jersey.

This will be achieved through natural breeding, stock purchases and embryo transfer from the top performing cows to accelerate genetic gain.

Despite their longevity and popularity in their early years in New Zealand, shorthorn are now regarded as a rare breed; the New Zealand Rare Breeds website says in 2000 registrations of purebred milking shorthorn cows numbered little more than three hundred.

Because of the small national population of the breed, M. bovis presents a much greater risk than to other breeds which is a real concern.

The New Zealand Shorthorn Association (NZSA) has a bank of frozen semen, “old genetics”, as insurance against diseases such as M.bovis and foot and mouth disease, Russell says.

“There’s only about 5000 milking shorthorns in New Zealand and they’re quite unique to New Zealand. They’re almost native really because they’ve been here so long. We have to be careful about biosecurity.”

In April 2019 the Central Districts Milking Shorthorn Club, of which Russell and Zac are members, are hosting the NZSA national conference at the Tocker’s farm.