Goal-setting key in fulfilling a dream

Setting goals, trying new things, being up for a challenge and always striving to do things better underpin Rob and Sharon Klaus passion for farming and achievements over a 23-year career in the Waikato.

After contract milking for the first ten years of their farming life, Rob and Sharon bought their first dairy herd in 2006 before moving to a bigger operation three years later.

Six years ago the couple bought 60 hectares 10 minutes from Matamata.“It was a pretty good feeling buying our own farm,” says Rob. “It was always the goal and we met that goal, fulfilling a dream of owning our own bit of land.”

Last year a further 35 hectares of neighbouring land was purchased, adding to the 190 cow split calving operation.Mostly flat with a little bit of rolling country, just one farm separates the Klaus’ farm from the bush of the Kaimai Ranges.

“We’re in a high wind and rainfall area and can get up to two metres of rainfall but the soil is free draining sandy loam.“ We mainly get a nor’easter and easterly wind that lasts a day or two. But when the storm comes through it can be pretty intense.”

Rob and Sharon also work very closely with their two adult children – Jacob 23 and Jess 22 – making this very much a family operation.

Two and a half years ago Rob built a 1050sqm calf shed and commenced a large-scale calf-rearing operation, partly to buffer against low dairy payouts, and increase the bottom line for debt repayments.“We rear 500 calves in the spring and 300 in the autumn, mainly friesian bulls bought in at four days old.

They pretty much go on once a day feeding straight away and it takes me about two hours in the morning when I have 500 on. “I rear them to 100 kilos and sell them on contract to an agent in the Hawke’s Bay, adding about 18% to our bottom line.” 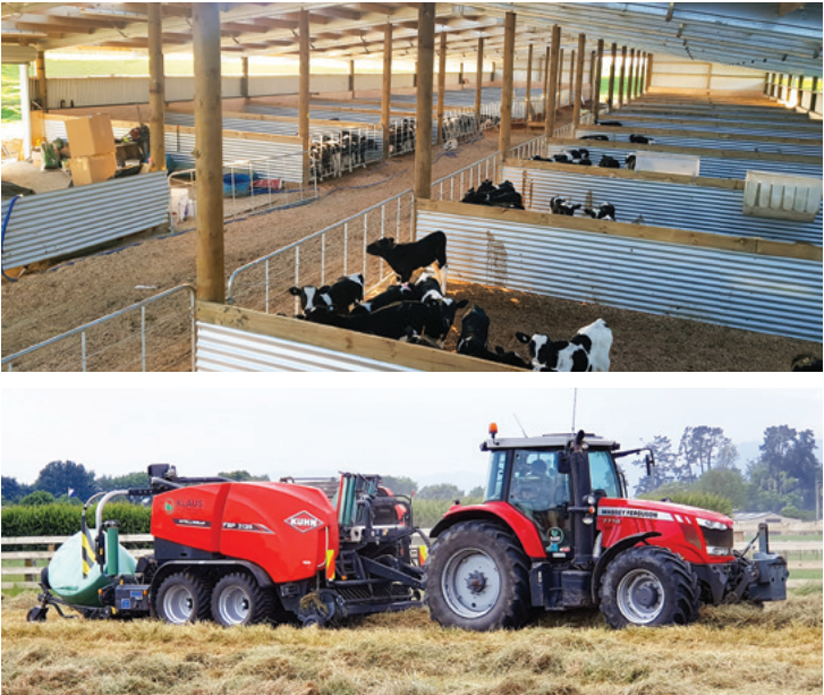 With Rob busy looking after his calves, Sharon and Jess have the mantle of responsibility for the dairy side of the operation, though also lend a hand in the calf shed when needed.

Jess’ partner is a contract milker and this year the couple reared a few of their own heifer calves with the intention of going 50/50 sharemilking in the next couple of years.

A diesel mechanic by trade working for a local Massey Fergusson dealership, Jacob Klauss bought his own tractor a couple of years ago and in partnership with his parents formed Klaus Ag Contracting Ltd. Covering the Matamata area and along to Te Aroha, the business has continued to grow.

Reflecting on future goals, Rob says it is about debt reduction over the next four to five years and taking life a little bit easer, enjoying hunting, fishing and just getting away a bit.

Tags:
Previous Article
New shed and smart systems boost more than just morale for Moorbys
Next Article
‘It has always been about family’