Sunrise at the milking shed at Rex and Loris Bates’ Tokoroa farm. Alex the dog with the milking herd on the Bates’ farm.

At just 22 years of age, contract milker, Tom Bridgens set out to put his critics in their place and prove age is nothing but a number.

Told he was ‘too young and inexperienced’ to take on a contract milking position, it’s fair to say Tom has exceeded many expectations.

After just one year on Rex and Loris Bates’ 80ha, Tokoroa dairy platform, Tom is on his way to producing a record 140,000kgMS from his herd of 300 cows and has bagged himself the Central Plateau Share Farmer of the Year Award.

Rex and Loris choose their contract milkers very carefully and among other things, Rex says candidates must have some sort of formal farming qualification.

As well as completing an ITO course, Tom had grown up in a dairy farming family, worked as a relief milker at age 13 and had gathered life experience during his OE through Europe, Asia and Australia.

He took up his contract milking position in 2018 and Rex says he quickly got the chance to prove himself.

“I believe if you dump a whole lot of responsibility on young people, if they’ve got what it takes, they will thrive.”

Tom entered the awards because he wanted to run his business the right way from the beginning.

Rex says being Tom’s first season in a manager’s role he wasn’t aware of what to expect with the competition but after the judges came around in the first instance they suggested that he get a bit of professional help, which he did.

“He got a bit of mentorship, he just needed more information as to what he was going to be judged on and that allowed him to fine tune his operation.”

Having worked his own way up through the farming ranks, Rex enjoys seeing eager young farmers taking the leap and encourages them to step out of their comfort zones.

In return Rex offers the right people plenty of support and they are well paid.

Tom works on one of the three dairy platforms owned by Rex and Loris.

Their son, Wayne Bates, a fully qualified diesel mechanic, returned home at age 25 where he is now a 50:50 sharemilker on the 120ha platform and they have another contract milker on their 220ha farm.

Their daughter, Kim Belfield, had her own hair-dressing business before returning home to run the day to day operations. 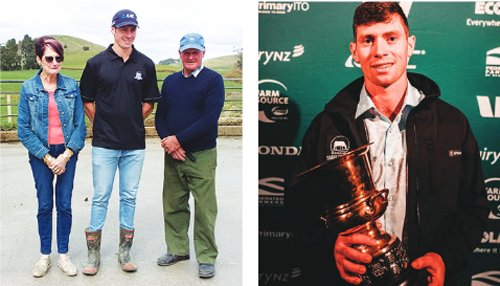 PHOTOS: Central Plateau share farmer of the Year Tom Bridgens with farm owners Loris and Rex Bates and holding the trophy at the awards ceremony.

Needless to say, Tom has been quickly signed up for another season but Rex believes he will soon be onto bigger and better things with 50:50 sharemilking dead in his sights.