Mangakino based dairy farmers Peter and Sarah Walters have just purchased a second farm next door and took over on 1 June. Peter admits the growth of their business came a lot sooner than they had planned.

“We tried our best to talk ourselves out of it but when the farm didn’t sell for a while we started doing analysis and saw that at the right price we could add value to our business,” he says.

Peter says they will put jersey crossbred cows on the new unit as it is a hillier farm and this is also reflected in the slightly lower stocking rate.

They don’t plan to change much as the new farm has an up to date effluent system and pond. They see improvements could be made around track and fence maintenance and pasture improvement.

The couple have nearly completed two seasons under the Te Ara Miraka farming excellence programme and will also bring the new farm into this system.

The aim of the programme is to improve efficiency and produce first class raw milk leading to greater profi tability to farmers and Miraka, with a lower environmental footprint.

Farms are independently audited by a third party that is accredited under JAS-ANZ to International Standards ISO/IEC Guide 65.

Peter says it fits in well with their goals of improving stewardship of the land and they achieved an impressive 98 out of 100 under the programme last season.

“Our goal is to get the perfect 100 every year. Every day you need to be doing things very well to earn every point. It’s not supposed to be easy – it’s supposed to be earned and takes real attention to detail.”

Peter will take an overall role across the two farms and says having the right team has now become even more important with a manager employed for the new unit and the second in charge stepping up to a junior manager role on the home farm.

People are something the couple place great emphasis on in terms of developing and growing good quality staff.

“We want people who are passionate about the industry and want to get ahead, people that are committed,” says Peter who says one of their goals is to become an employer of choice to attract the best people to their business.

“We have to perform well, especially under Te Ara Miraka, and so it is essential we have intelligent, motivated people on our team.”

Both Peter and Sarah grew up on dairy farms and studied at Massey University completing degrees in applied science in agriculture.

The Walters have four children: Caitlin, 12, Nick, 10, Cameron, 9 and Matthew, 7 and will continue to farm sustainably to the Te Ara Miraka goals – people, environment, cows, milk and prosperity – as they see this as a winning formula. 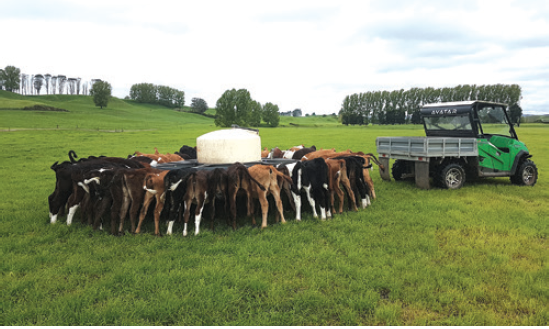