From garlic to grapes, a life on the land

With a lifetime spent on land first farmed by his great-great grandfather in 1855, Peter Jackson’s journey has taken him from growing garlic to grapes.

Nearby in Northbank, a fifth block is currently under development with 16 hectares planted last year, a further 12 hectares about to be planted and a 20,000 cubic metre dam in the very final stages of completion.

Now in his seventy fourth year, and almost the accidential viticulturalist, Peter says he was probably destined to be a farmer from the age of 10 when he began growing garlic as a way of making pocket money.

Leaving school at 16 to work along side his father on the farm, the childhood interest in growing garlic evolved into a significant and lucritive business spanning almost 50 years, supplying local markets throughout New Zealand and exporting to Fiji and Australia.“I always loved growing the garlic—growing it, harvesting it, selling it.

“We first looked at grapes when Montana came to Marlborough in the early 70s, but garlic was going very well for us even though it was getting harder to lease nearby land to expand. “By the 90s land was getting shorter and I was getting older and we finally started to plant grapes.

“We were doing grapes and garlic for a while but I was trying to do everything myself and eventually had to let one of them go because they clashed. “At that stage we had enough grapes in the ground and in 2008 we dropped the garlic entirely to concentrate on the grapes.”

With Marlborough’s cool nights and long hot days, coupled with free draining silt loam on top of river gravels, 98% of Peter’s grapes are high yielding sauvignon blanc with a little bit of chardonnay and a very small amount of pinotnoir.

“We contract grow 103 hectares of sauvignon blanc for Villa Maria, supplying them with 15 tonne per hectare,” says Peter.“We have four 60,000 litre tanks here for any excess fruit which is sold on the open market as bulk wine.”

Following five weeks with no water last year, Peter made the decision to install a 20,000 cubic metre dam at the new Northbank development. 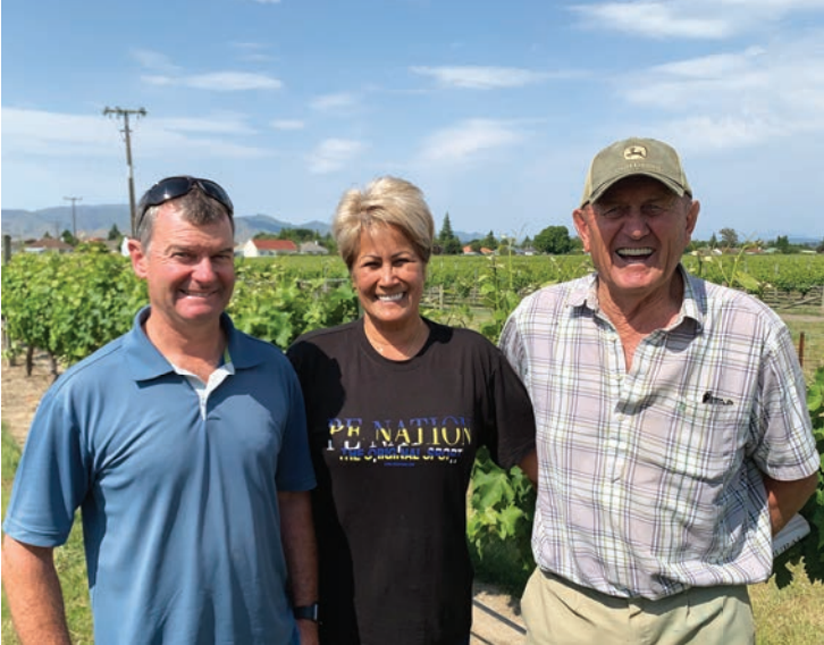 “We should have had the last block of grapes in the ground by now but because of the dam development we haven’t been able to. “With all the wet weather we have not been able to line the dam but hope to do so in the next week or two.

“We have just finished putting all the pipes in so the dam should be finished by late November and will supply the whole Northbank development for four to five weeks at normal watering levels.

If we feel it’s getting short we will ration the supply.” Rod Brailsford is operations manager with responsibility for day to day management of the vineyard and is now in his second vintage.

“Rod’s a local man with 17 years experience in the viticulture industry. His wife spends a day per week in the office as our office accountant. “We have a good team working here with five permanent vineyard operators plus office staff.

“Graham Rodgerson has been with me for 30 years in January working along side me in the garlic and grapes and his son is now working for me as well. Deb makes sure everything is done correctly in the office.”

With a lifetime spent in development mode from growing garlic to grapes, Peter and Deb now spend their winters in the warmer climes of Fiji and retirement is looking increasingly attractive.

“I have a great operations manager and great team of operators here. “Occasionally we have considered leasing the vineyard as a lot of retiring people around here are doing, but at the moment we are very happy with the way things are.”