Miki-Rae Cullen loves his supervisory job at Oceania Dairy and says he’s come a long way in the two years that he’s had the role looking after a team of eight process controllers.

Starting as a process controller himself, it took Miki-Rae 18 months to be appointed supervisor.

He says the coaching that he’s had from management has developed his people skills -just as he now develops his own staff.

“That applies to me as well – like it helps my development as a supervisor to help and coach people too.”

Reflecting on his future, Miki-Rae says he wants to grow with the company.

He hopes the next step for him will be a management position when it comes up.Until then he’s happy honing his supervisory skills.

Miki-Rae’s journey after leaving school started when he took a job in a cool store workshop where he was involved in a bit of engineering and refrigeration work, some HMI (human-ma-chine interface) automation, running compressors and monitoring plants.

With a couple of young children Miki-Rae looked for shift work so he could spend more time with his family.

When an opportunity arose to work for Oceania he embraced it with both arms – even though he knew nothing about the dairy industry.

“When I did the walk through of the plant before starting here it just blew my mind- the structure of it all, the way things were run, the high standards – from what I was used to it just seemed a very professional, clean and tidy industry to be in.”

About 12 months after starting at Oceania, Miki-Rae was sent to China as part of a team of 16 to see how the milk plant operated there.

“That was my first time out of the country and it really was quite an eye opener.

“It was a very busy operation with a lot of people all rushing around.

“It was interesting to see how things operate over there and actually bring ideas back here that we could implement.

We were also able to share how we do things so it was quite an exchange of ideas.”

Now 26 and with four children aged between one and seven, the four-days-on and four-days-off shifts allow Miki-Rae the time to attend school events, do the after school pick-up and be part of his children’s life much more that a 8–5 five days a week job would allow. 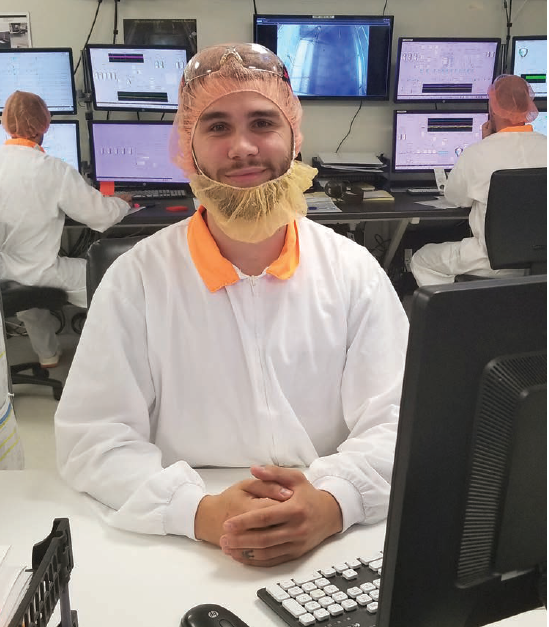 Miki-Rae Cullen: enjoying the challenges of working for Oceania Dairy and the opportunities it offers for personal development and progression.

“My fiancée Dannielle appreciates me being home more often with the kids and it frees her up to get out do things if she needs to.”

Oceania will shortly be introducing a bus service for its shift workers taking them to and from work; something that Miki-Rae and Dannielle are very appreciative of.

“For me it’s a 60 kilometre drive to work and it can be very tiring after a 12-hour shift and you’ve been awake for 15 hours. Danielle always worries about me driving to work.