Nic Verhoek says he is an “accidental dairy farmer”.

After growing up on a lifestyle block in the middle of a family owned sheep and beef farm he ended up completing a bachelor of design majoring in photography before deciding to become a dairy farmer.

“I wanted to own a farm and dairy farming was the best vehicle to achieve this,” he says.

Nic worked his way up the dairy ladder over three seasons before taking on a management position in Masterton on a 210ha effective property owned by Selwyn and Jenny McLachlan.

He is now in his third season on the farm, which peak milks 920 predominantly Friesian cross cows.

Nic took out the Dairy Manager of the Year award for the Wairarapa/Hawke’s Bay region as well as winning feed management and livestock management merit awards.

In his first year dairy farming he was named trainee of the year for the Manwatu/Horowhenua/Rangitikei region where he was working at the time. Nic says the competition has really helped him and wife Kirsty to fast track their business and goals.

“Every day we just try and look after the cows first. We do what we do because we’re passionate about livestock. If you do the simple stuff well – ensuring the animals are healthy and fully fed – everything else follows,” he says.

It sounds like a simple philosophy but in reality it takes planning and hard work.

The farm is a system five and split calves as well as winter milks.

Around 35% of the cows’ diet is bought in from outside.

Close to 16 tonnes of dry matter per cow is harvested on farm.

The entire platform is under irrigation – four centre pivots with gaps filled by long line laterals.

“It is utilised year round so we can get them off the pasture at critical times and prevent damage,” explains Nic.

Kirsty, who has a Phd in ruminant nutrition provides special expertise that Nic acknowledges is a distinct advantage.

Kirsty is employed by BakerAg as an agribusiness analyst and also does casual work as a senior scientist at AgResearch.

“On this farm we have a ‘no hungry minutes’ policy so cows are never hungry. They get breakfast on the feed pad, then get grain in the shed while milking, then go out to the pastures and graze. The same formula is replicated in the afternoon.”

For example if it’s hot the cows are put in a paddock next to the barn so they can wander in to the shade at will.

Automatic gates allow cows to move at their own leisure.

If there is a bad storm the cows get a break for a couple of milkings going to once a day.

Last season the farm produced 490,000 kilo-grams of milk solids and they are targeting 500,000 kilograms this season.

It’s a real passion for cows that is their driving force and they plan to go 50:50 sharemilking in 2020 as the next step towards farm ownership. 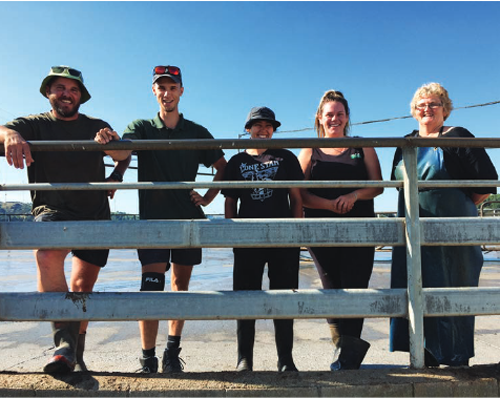 They also like to give back to the industry where possible – Nic has judged the trainee of the year competition three times and is the key DairyNZ Tiller Talk farmer for the Wairarapa region.

“Kirsty and I are both passionate about producing food and our goal is to have our own farm. We are utilising different vehicles to achieve this including rental properties and our own livestock. We’re just passionate about cows, the outdoors and the environment.”