Off the tools and back onto the farm

The children’s room in the renovated dairy shed, complete with TV allows mum and dad Mike and Nicola Johnston to keep a close eye on the kids while milking the 300- cow herd.

Sometimes a man just has to step over the other side of the fence to know where his heart truly lies. Born and bred the son of a Taranaki dairy farmer, Mike Johnston’s first passion was tinkering with vehicles and racing stock cars.

Upon leaving school Mike pursued his dream, qualifying as an automotive engineer – then realized swinging the spanner for a living wasn’t for him.

“I realized the hectic rat race of being in town and working inside all the time wasn’t my cup of tea – the old farming lifestyle appealed to me a lot more. So I left the workshop behind and went to work for the joker down the road as a dairy assistant.” That was the 2006/07 milking season.

The following season Mike’s dad, who has a 110hectare (effective) dairy farm in Douglas, near Stratford, leased his neighbour’s farm, joined the two together, increased the herd size and invited Mike home to farm.

“So I did that for eight years starting as farm assistant, finishing as a manger before my wife Nicola and I took a 25% equity partnership in the home farm in the 14/15 season, as part of a progressive succession plan.”

Around the same time as Mike and Nicola were taking the equity partnership, the neighbour sold his farm, influencing a number of changes to Mike’s farming operation.

Mike and Nicola had been milking 600 cows through the neighbours shed but the sale of the farm meant a return to Mike’s dad’s 24-aside herringbone.

A decision was made to reduce the herd to 300, build a new shed around the existing shed and increase capacity to 30 sets of cups, future proofed with the potential to increase to 36-aside.

Making use of their engineering and carpentry skills, father and son did the bulk of the work themselves, producing a virtually brand new shed.

Mike explains, ‘We extended walls and the pit of the old shed, put new plant in, new roof, new poles, new yard and entrance way, new Protrack drafting system – the whole shooting box – all built around the old shed. We got a hand with the concreting and didn’t do any of the sparky work or installation of the machines but we did the rest ourselves.”

Another key feature of the shed is a room for the couple’s four children; twins aged 6, along with a 3 year old and the youngest coming up to 12 months. 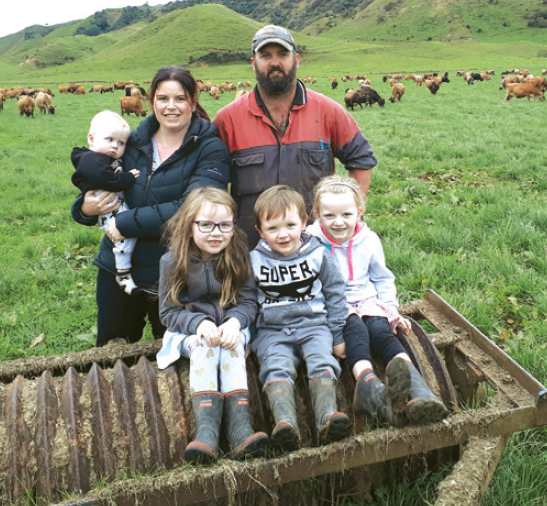 With Nicola actively involved on the farm as calf rearer and relief milker, the adjoining ‘children’s room’, complete with TV, books, games and cot, enables both Mike and Nicola to be in the shed, keeping a close eye on the kids.

“There are definitely challenging days when you ask why you are doing it, but it’s a lifestyle – being outside. My big goal would be to be able to help my kids into farms. I want to make sure my kids have the same sort of opportunity as I had.”

This article was brought to you in association with the following businesses.