Awards ‘open my mind to different side of farming’

Encouraged to enter the Dairy Industry Awards by last year’s Sharemilker of the Year, Dan and Gina Duncan, Michael checked the competition details and found that he was a week late to submit his entry.

Not to be deterred, Michael contacted event organiser Chris Keeping and asked if he could submit a late entry.

Request accepted and entry submitted, Michael embarked on the award journey, which saw him, consume two reams of paper documenting the flood of ideas and thoughts that came to him day and night.

“Every time I got the cows in something would jump into my mind. My problem was how I could get it all down to an hour and a half presentation. The real benefit for me was opening my mind to a different side to farming – how you run the business side from creating budgets, the vaccination process, mating – everything.”

Michael, who holds a bachelors degree in science and agriculture, majoring in animal science, immigrated to New Zealand from the Philippines in 2008.

Arriving in Invercargill in the middle of June, and coming from a country with 34degree temperatures, Michael remembers it being one of the coldest days of his life.

Language was challenging when Michael first arrived in New Zealand.

Even though Filipinos learn English from a very young age, it is quite different from the Kiwi accent and usage.

It took Michael a little while to get used to terminology like ‘bucket’ which is ‘pail’ in the Philippines and ‘Ute’ which is ‘pick-up truck’.

Starting as dairy assistant on a farm in Winton, Michael steadily worked his way up the ladder and in 2010 became a herd manager at Iron Bridge Farm, part of the Fortuna Group of farms, and was joined by his wife Succoro.

The 480ha effective property can get very wet at the end of spring and throughout autumn.

Predominantly fl at farm and mostly well drained, careful management still has to be applied to avoid pasture damage – something that is assisted with a herd home and feed pad.

Michael’s five Filipino staff have been with him since 2016 and together they form a tight farming team.

“It’s hard to find good staff but when you do it’s hard to retain them. You need to keep up-skilling them and give them new learnings so they can keep climbing up the ladder. I keep up-skilling my people otherwise they’re not learning and they will leave.” 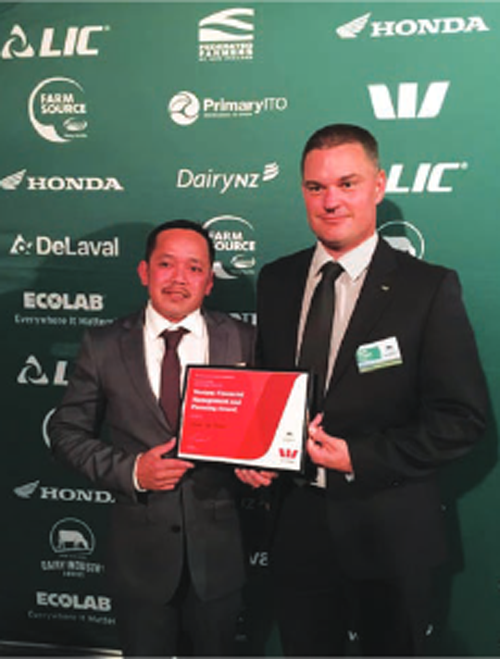 Michael’s goal in the next five years is to go 50:50 sharemilking and next season he will take a farm manager’s role in Riversdale for the Fortuna Group managing an 800-cow farm, as well as providing supervision of another farm with 800 cows.

The move will provide Michael with the opportunity to start accumulating his own herd in preparation for his next big move.

A trial of a unique pain relief treatment for calves undergoing disbudding procedures was so successful that veterinarians believe it has potential to improve the welfare of millions of New Zealand calves.

Disbudding is a common, but potentially painful procedure carried out by farmers, vets and technicians.

It commonly involves the use of a hot iron to cauterise and remove horn-producing cells before they fuse and grow into horns. Up to two million calves are disbudded in New Zealand every year.

The groundbreaking treatment, known as Tri-Solfen, was initially developed in Australia for use in sheep and is being distributed in New Zealand by Bayer.

The local anaesthetic and antiseptic topical liquid provides quick pain relief when applied to a wound, and controls and reduces the likelihood of infections and haemorrhaging.

Bayer senior technical services veterinarian Dr Kirstie Inglis, who was involved in setting up the New Zealand Tri-Solfen trial, says the product will make a big difference to calves on Kiwi farms.

“It contains two types of anaesthetic – a shorter acting one and a longer acting one – combined with adrenalin and an antiseptic. Used straight after disbudding Tri-Solfen will make a huge difference to calves at that time of year when they’re young and vulnerable, and in need of the best start in life.”

Independent lead researcher in the Tri-Solfen trial Dr Emma Cuttance, from VetEnt Research, says disbudding is known to be incredibly painful for calves.

“We found the Tri-Solfen product to be fantastic in reducing the pain that calves were experiencing following disbudding – out to 22-hours.

“In some study groups, there was a 90% reduction in marked pain response when compared to the control group, which is extraordinary.”

In October, legislation will come into force which, at a minimum,requires a local anaesthetic nerve block to be applied prior to the disbudding procedure.

Tri-Solfen applied to calves immediately after disbudding had a positive effect on their behavioural responses and pain sensitivity for at least 22 hours.

Another important welfare outcome of the trial showed there were positive effects for calves that were disbudded under sedation compared with calves disbudded without sedation.

“I think there really is a need for the veterinary industry to take a closer look at how much pain calves are actually in during disbudding,” says Dr Inglis.

“I would encourage farmers to choose that their calves are disbudded under sedation, with a local block and then given Tri-Solfen – that will give them a great start. In fact, in the study it was this group that put the most weight on at our 28-day weigh-in.”