After 14 years, Mendip manager feels melded to the land

Being appointed Mendip Hills Station’s manager at the age of 28 was like a dream come true for Simon Lee.Owned by the Black family, and bordered by the Leader River on the southwest, the Conway River on the northeast and the Gelt River on the norwest, the 6200-hectare North Canterbury sheep, beef and deer property sits at the end of Mendip Road, just north of Parnassus.

Complementing the main station is a 150ha finishing irrigated block 11 kilometres away in Spotswood, with another 150 hectares deer fenced and irrigated in Ashburton, used mainly for deer finishing.

From solid farming stock in the Wairarapa, after leaving school Simon crossed the great divide, attending Telford in Balclutha where he earned a Diploma of Agriculture.Charmed by the South Island, Simon took a shepherding role in North Canterbury.

Moving through the ranks, by the age of 24 he secured his first sole manager’s role looking after 11,000 stock units on 2500 hectares at Pahau Downes just behind Culverden.Four years later he put his name in the hat for Mendip Hills – a property that he’d had his eye on – and was successful.

“I always set my own goals – even if it was on the back of a cigarette packet – and one of those goals was to manage Mendip Hills or a property like it. The scale of the property appealed to me, as did the challenge of the role – I could see that there was real potential to develop the property and make improvements to the staff structure, livestock breeds – all that sort of thing.”Simon reckons that over the years his passion for farming has changed.

“When I was a shepherd it was about striving for that next role – from shepherd to head shepherd to stock manager to manager to general manager. But after you go through those roles different things drive you – now it’s more staff development, get-ting the best out of them and reaching production targets.”

Looking after a team of eight full timers, Simon says he’s now got a good team about him and makes the point that without his staff he’s nothing. The farm is home to 10,000 Romney ewes and 2300 hoggets all put to the ram.

“Our lambing percentage is 148%. We finish 60% of our lambing with the rest sold store in the middle of December. We have 980 breeding cows – an Angus herd and a Hereford herd – with 247 heifer calves. At the moment we have 2300 cattle including trading cattle. We have 1600 breeding hinds with all deer and cattle progeny finished on farm.” 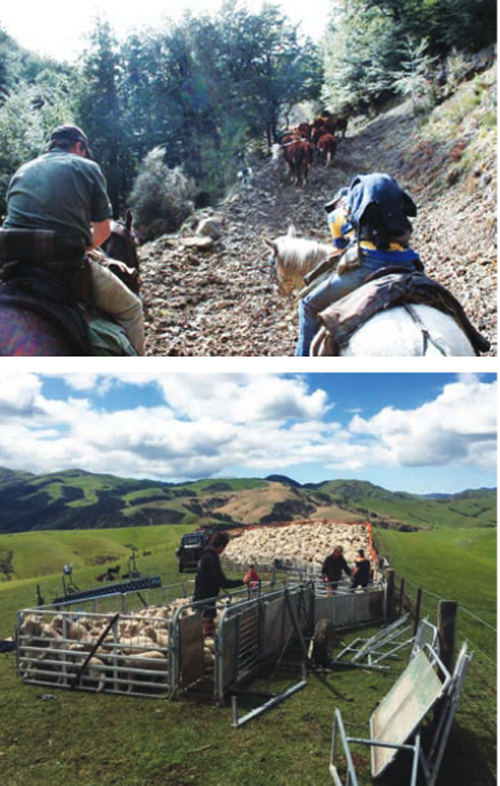 For the last four years cattle from Mendip Hills Station have been part of Beef+Lambs progeny testing trial. There are five farms throughout the country involved in the trial, which compares performance of sires through their offspring.

The trial will come to an end in two years and Simon says he has gained considerable knowledge in respect to genetics as well as being exposed to a lot of networks and management techniques.

Fourteen years after taking the station’s reins, Simon still feels grateful for being given the opportunity to make his mark and feels there is a piece of his heart now melded to the land.

Reflecting on his future; having worked hard to develop the property, experienced two droughts and a severe earthquake that undid much of what he had achieved, Simon feels the property has a hold on him.

“I love it here — I really do. I’ve been through a lot with the property at different stages of my life and the farm and I cannot imagine being anywhere else.”