Medbury Farm – dairy and proud of it

Partners in Canterbury’s Medbury Farm, David and Brenda Hislop, Mark Daly, and Janet Girvan’s strong awareness of farming practices and how they influence the environment have won the business the 2018 Canterbury Ballance Farm Environment Award.

Awards judges say the partners show excellent attention to detail in business planning, governance, and policies, and how that influences and drives the business, as well as great staff and people management.

It was Janet’s husband Eric Jacomb, one of the founding partners in Medbury Farm, who encouraged putting entering the Ballance Farm Environment Awards in Medbury Farm’s business plan four years ago.

His sudden death in a tramping accident two years ago left his wish needing to be fulfilled, which spurred resident equity partners the Hislops on to achieving his goal.

They say they wanted to enter the awards to show what is good practice and the pride they have for what they are doing, and to counter negative press about the dairy industry. Medbury Farm milks 1240 cows on 442ha at Hawarden.

The partners’ level of passion, pride, and promotion for the dairy industry is evidenced by the large sign at the farm gate on Medbury Road, which proclaims ‘Proud to be a Dairy Farm’.

Over the past 15 years and with the equity involvement of Mark Daly from 2008, the business has developed to two dairy sheds and housing for six staff members on the property.

The original 50 bale rotary, milking 500 cows, has been joined by a second shed and the business boosted to a carrying capacity of 1240 cows with 300 replacement heifers.

The farm’s original border dyke irrigation system using water from the Hurunui River has been upgraded to a more efficient centre pivot and supplementary sprinkler system.

Spray irrigation across the whole property draws on water from Medbury Irrigation Company Limited. A variable rate irrigation system on the centre pivots means no unnecessary water or effluent applications as the sprinklers are programmed to automatically turn off over lanes and waterways. 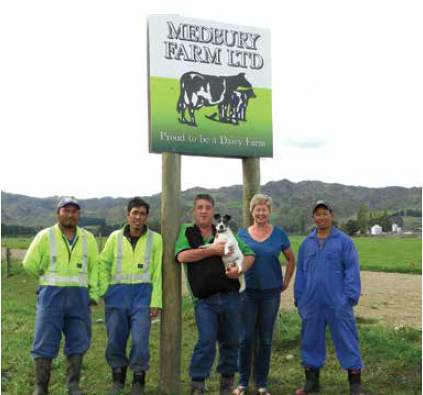 The sign says it all. Proud dairy farmers Dave and Brenda Hislop with Medbury Farm staff.

David says Medbury Farm is not reinventing any wheels, but is applying substance over symbolism.