People the focus for farm manager

Kerry Higgins with a staff member in the 60-bail rotary shed at Glenire Farm.

Kerry Higgins is farm manager at Glenire Farm, converted by the O’Sullivan Family. The 350 ha effective farm is situated west of Albury, in the Fairlie district, inland from Timaru and carries a milking herd of 1200 cows.Kerry is still settling into the role of the extensive farming operation. He’s worked his way through various roles in dairying and says there’s a lot of support and guidance to help carve a good career path for those prepared to work hard and learn.

“I think that’s one of the hallmarks in dairying compared with some other forms of farming. My experience has been that if you’re seen to be positive and engaged in your farming you will have opportunities to grow your career,” says Kerry.

“You have to celebrate the small successes and I think that things like discussion groups where situations are shared, good and bad, really help farmers to feel they are not on their own.”He’s also philosophical about the tougher times and situations that can happen and is pleased to see an opening up of the view that ‘it’s ok not to be ok’.

The farm processes its milk through a 60-bale rotary shed with all the bells and whistles. The sheer size of the herd is managed by splitting it into two milking herds.In his role, Kerry usually starts his day going to the milking shed, checking up on the staff and the cows. This is followed by planning the day.

“My main job though is the people, making sure they are enjoying their work and supported if there are problems.”Working with Kerry is a team of five staff who work on an 11 on three off roster and a structure of four different roles starting at different times each day, each with their specific tasks.

“It means the team has variety within their days on and everyone experiences the same responsibilities. It’s fair so there are no arguments.”One of the roles Kerry most enjoys is guiding new staff around the various jobs to perform.

He’s got a sensible attitude with respect to training up new workers in that he considers it his responsibility to adapt to the new person and the way he or she thinks and learns rather than operating in a rigid set way.“At the end of the day it’s about ensuring people are happy working on the farm, not working at being unhappy.”When NZ Dairy spoke with Kerry calving was well underway and had so far been good with minimal losses.

The weather has had some impact on grass growth with morning frosts hampering growth. Kerry said once these pass, pasture production will boom. He is also happy with cow condition and sees a positive season ahead once the grass wakes up.The farm is a mixture of undulating terraces.

Soils vary between free draining and clay; herds are managed between the two to ensure minimal environmental impact.The farm was converted 11 years ago and sits in an area which is not typically dairying.Kerry says, owners Ryan and Tina O’Sullivan have been fantastic.

“I have just come from a farm with 700 cows, the smallest farm we have been on so this move is going back to what we are used to and the experience has been very positive for me and my family.”Kerry and wife Anita are soon to welcome their third child. 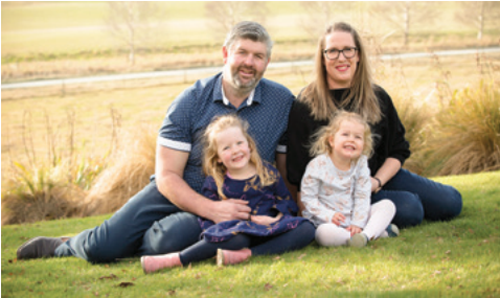 Kerry with wife Anita and children Mackenzie and Emerson.

The couple already have two daughters, five year old Mackenzie and Emerson, nearly three.Anita takes care of much of the administration, payroll, HR side of the company and gets out and about on the farm whenever possible.The kiwi-cross herd is likely to produce upward of 500,000 kgMS this season.

Tags:
Previous Article
Raw A2 milk a hit with customers
Next Article
Plenty of competition on shared farm