To be different can be challenging at times says Kepler Farms’ manager Travis Leslie, but after the farm was announced as the Supreme Winner of this year’s Southland Ballance Farm Environment Awards, daring to be different has certainly paid off.

Owned by Pamu, Kepler Farm has been managed by Travis, with the support of his wife Catriona, since 2012.The farm runs around 7300 sheep and 1650 cattle on 1640 hectares (1503 effective) with the main focus of the operation being the terminal sire sheep flock called FocusPrime.

In the last two years, more than 10,000 trees, plants and shrubs have been planted in riparian zones and as shelter for stock and the judges noted the farm’s impressive Farm Environment Plan and commended all the work that had been done.

Extremely proud of their achievements, Travis says the experience has been a career highlight though admittedly a lot of work and slightly daunting putting himself out there.

“When you break from the mould you’re often criticised too, so to be able to prove that what we are doing is working for us and people can see that is fantastic.”He says within your own company and on farm it’s easy to convince yourself you’re doing the right thing but to have complete strangers come on farm and confirm that, is a huge confidence booster.

Travis says he considers himself a “long grass farmer” and isn’t afraid to have the farm looking “a bit scruffy”.“When I see a scruffy paddock with a lot of length I see potential and more feed available,” he says. Fescue was introduced by Travis upon his arrival and now covers more than 700ha of the property.

“We grew fescue up north with a lot of success and felt that it would grow very well here in this drier environment and the other thing that pushed me in that direction is that the grass grub is bad here and fescue is tolerant to that so we are winning there as well.”His operation, he explains, is based around the principle of feeding stock to the ultimate and getting results that way. 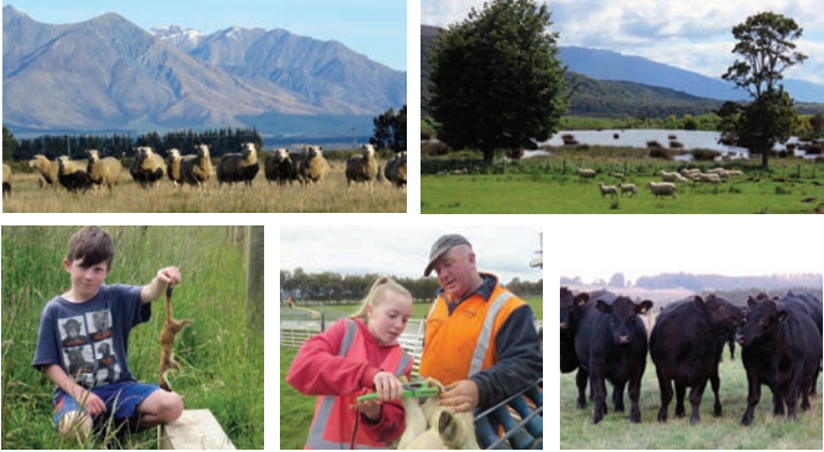 FocusPrime stud ewes, Takitimu Mountains behind; Robbie’s Pond, one of the wetlands created on the farm; Robbie Leslie with one of the stoat traps; Travis shows Ellen how to tag lambs at docking; Pamu Angus steers.

“When the grass is beating the animals I must be at full production because the animals are eating to capacity. So that is what I’m always looking for, for the grass to be ahead of them.”Fescue has enabled much of the stock to be grass wintered and last year a total of 65% of stock were on grass wintering.

Next year Travis says they’re taking a leap and will have all of their stock on grass wintering. “There will still be supplement but moving away from crops entirely is massive.”This isn’t a new venture and is something that Travis and his staff have been working towards since arriving on the farm.

“Every year the stock units have gone up and the crop area has gone down,” he says. The results from the Ballance Farm Environment Awards have confirmed that Travis and his team are definitely on the right track with what they are wanting to achieve and has given them the confidence to keep pushing forward.