Mid Canterbury contract milker Jon Dampney and his wife Hayley have a lot on their plate with three dairy operations all part of the picture for the hard working couple.

Jon first started at Deebury Pastoral’s Ealing Dairy, near Hinds, almost a decade ago, working his way up to manager there before progressing to contract milking in 2015.

Ealing Dairy is a 273-hectare (effective) property running 1100 crossbred cows, milked out of an older 50 bail rotary shed. An opportunity came up four years ago to purchase a small dairy farm in Ruawai, Dargaville.

“This season we are milking 240 cows, but in the past we have milked a lower number alongside some beef cows, and also tried out winter milking and a split calving,” says Jon, whose parents live about two hours north of this farm; they own 45 per cent while Jon and Hayley own 55 per cent.

To add to that mix, Jon and Hayley are in their second year 50:50 sharemilking for Hayley’s parents Robbie and Diana Bennett on a neighbouring 115-hectare property with a herd of 400 cows. The property was only recently acquired by the Bennetts, whose background is in cropping at Wakanui.

“It was something they wanted to do, so they jumped at the opportunity and we’re all learning as we go.”At Ealing Dairy, Jon is managing four staff. On the smaller farm, which has a 24-a-side herringbone shed, there is a manager and two staff.

“He’s been with us five years and is looking after that one now. I go around when needed – fortunately, the other farm is only two minutes down the road so it works out really well.”

As well as their farm duties, Jon and Hayley have responsibilities at home as parents to three active youngsters: George, 5, Angus, 3 and Sophie, who turns one in mid-December.

Hayley is pretty hands-on on the farm, along with looking after the book work and financial requirements for all three farms, and rearing calves at Deebury Ealing Dairy.A farming history runs through both sides of this family. Jon grew up on a Northland dairy farm before moving south with his parents as a teenager. 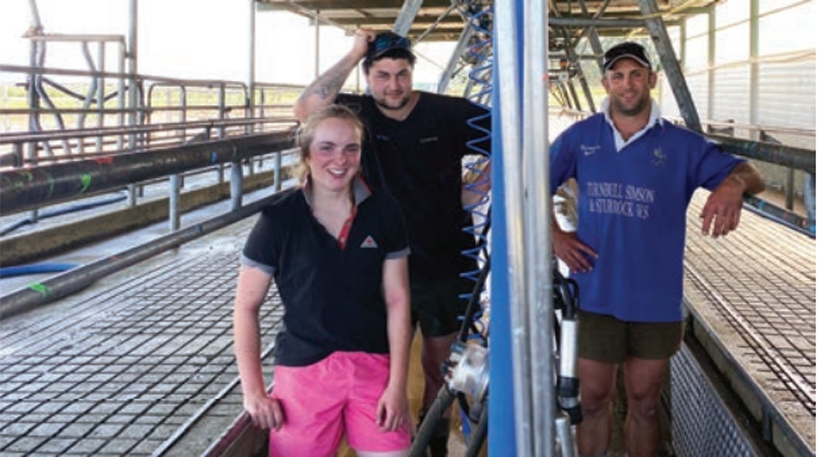 His parents later returned to farming in the Bay of Islands and Jon’s brother also works on a dairy farm in the North Island.Jon stayed on in Mid Canterbury, initially working at a local tyre shop for many years.

Before too long, he returned to dairy farming, with farm ownership in the Mid Canterbury area now the ultimate goal. “We’re working our way towards that and waiting for our chance.”

Production has been holding steady through the first year of 50:50 sharemilking with 480kgMS per cow achieved. Only a small amount of palm kernel is fed out, the rest being grass silage.Spring this year has been off to an unusually slow start with cooler wet weather bringing greater reliance than usual on silage.

“We’re all waiting for that first spring flush to turn up – we need that warmer weather.” Off-farm, Jon is well known in the district for his commitment to rugby in Mid Canterbury, and Hayley is involved with hockey and the local playcentre with the children.

“We are very lucky to have played sport for as long as we have; we have made some lifelong friends.” Today, their focus is very much on family and farm, working hard to secure a sustainable future in dairying.