It was the offer to purchase the neighbouring farm that saw John and Debbie Moorby, who farm in the Waipa district, decide to make significant investment in their business. As their cow numbers nearly doubled as a result of the purchase they invested in a Waikato Milking Systems 80-bail Centrus composite rotary platform and have managed to reduce one labour unit and make their staff’s job easier.

The Moorbys progressed through the industry as 50/50 sharemilkers before buying a 130ha farm in 2001 near Te Awamutu. Their land and cow numbers grew until they had 205ha milking 640 cows. In June 2018 they purchased the neighbouring 145ha farm.

They started milking in the shed from the start of this season and haven’t looked back.John says they are still learning the capabilities of the technology and integrating it into their business.

It includes the ECR Plus system – a cup remover that also collects milking data from other equipment installed on the platform. Part of this equipment is SmartD-Tect, which simulates pre-milking so cows let their milk down faster as well as warning of early signs of udder health problems.

The BailGate control system helps them manage cows on the platform as the straps of the BailGate can be lowered or raised automatically when the cup removers are activated There is also SmartSpray teat spraying in each stall.

John says it didn’t take long for the herd to adapt to the new shed.“We were a bit aprehensive about how it would go. After three milkings most were walking on them-selves. An inshed feeding system helped of course.”

A big driver of the inshed feeding system was to provide a way for the cows to get enough magnesium and zinc. The cows are fed one kilogram of meal per milking. Previously only the shed on the farm they recently purchased had inshed feeding and John noticed those cows had a 6% empty rate compared to 13% for the rest of the herd.

The new shed also includes a carpeted staff room with kitchen table and chairs, which opens to a viewing platform where visitors can watch cows being milked. The Moorbys have contemplated a farm stay to diversify their business where guests could watch the cows being milked, drink a smoothie made with the milk and learn more about farm life. 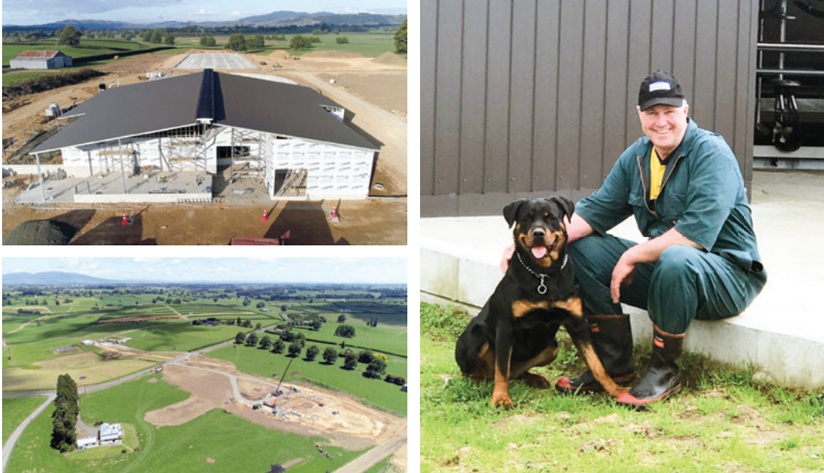 The new system also includes a concrete feed pad where maize silage is fed seven months of the year. It is cleaned by a greenwash system that then goes through a new weeping wall system comprised of two 8m x 70m walls before filtering into a lined pond 50m x 60m and 4.5m deep.

John says they couldn’t have coped with the huge growth of their business without a great team. There are long serving staff members including one who has been there ten years and another five years.

Debbie rears all the calves with the assistance of staff, completes bookwork and important things such as health and safety. John still milks full time but hopes that the new technology in the shed will enable him to have more time off and a better work-life balance.

“Good staff are so important. They want to do well both for themselves and for us.”Target production this season is 500,000 kilograms of milk solids and John and Debbie’s eventual aim is 550,000 kilograms as they stream-line their system.