PHOTOS: Devyn 16, Rylee 14, and Charlytte 12, with Sheree and Jarrah Sheehan.

Developing a passion for dairy farming helping on his grandparent’s farm in the Waikato, Jarrah Sheehan was confident farming was what he was going to do when he left school in the late 90s.In those days New Zealand dairy farming was seen as a sunset industry and farm ownership the privilege of those with family farms.

Strongly advised to head to university, Jar-rah spent 18 months at Canterbury studying Civil Engineering – something that appealed to the mathematical side of his brain.But things have a way of finding their natural path and by the end of that period Jarrah felt he had been at university long enough.

Crunching the numbers he concluded he would be better off starting his farming career rather than continuing to incur debt.“I took an assistant manager’s position on a farm for a year, then moved to another farm on another farm for year. In April 2001 an opportunity arose to buy 270 cows and go 50/50 sharemilking.”

Jarrah says he was at the right place at the right time – both with the sharemilking and it was the year that he met Sheree, his future wife.The farmer that Jarrah was working for knew a farm owner in Te Aroha who had been interviewing sharemilkers but they had all turned the job down.Jarrah approached the owner and said he had some capital but probably not enough to appeal to a bank for a loan to buy a herd of cows.

“So he provided the guarantor to enable us to buy the cows. We sharemilked for four years before buying the Fonterra shares off the owner, cancelling the 50/50 contract and leasing the farm. “A year later we bought two thirds of the farm, with the owner retaining a third and leasing it back to us.”

A couple of years earlier, Jarrah and Sheree commenced a sharemilking contract on a farm across the road, entering into equity partnership the following year with two other partners.In 2013 the Sheehans bought both of the other partners out and moved into a home on the property that had been built during the partnership.

Deeply proud that he and Sheree have managed to own land, Jarrah is quick to say his parents have a minor shareholding in the farm, selling their town property and moving into the farmhouse on the original farm. 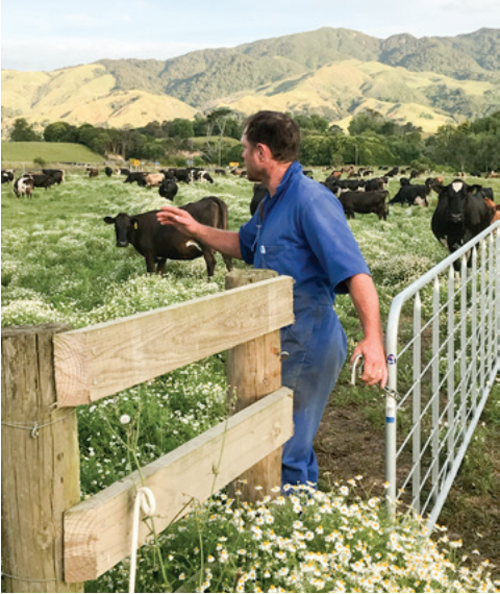 Jarrah Sheehan out checking the herd.

Operating a 50:50 split calving operation, Jarrah and Sheree have a winter contract with Synlait Milk in Pokeno.

Recently hosting a Dairy NZ Discussion Group on the farm with about 20 of the area’s 30 farmers at-tending, Jarrah says while a range of seasonal farm management topics were discussed, like maintaining grass quality and mating, the real benefit was the ability to network and share concerns.

“You know you’re having a problem on the farm – but you don’t realise that others are having the same problem until you get into a room and start having a candid chat.”

Tags:
Previous Article
Another growth spurt for equity partners
Next Article
Farming for a sustainable future in Manawatu