People talk about resilience in farming – resilience to the weather, debt burden, public opinion and of course ‘the payout’. Another way of putting it could be having courage to keep going and the cleverness to know when change is a good option.

Jared and Susan Ross’ journey has certainly seen the peaks and troughs in their relatively short farming career, coming, as Jared says, ‘within a whisker of being dispatched from the industry following a $3.85 payout’.

Recently appointed as chairman of the North Otago Federated Farmers dairy section, Jared has quite a story to tell about their 10 years in the industry and what has got them to where they are now.

Entering the industry as a 21 year old herd manager on a South Otago farm, Jared says he probably thought he knew more than he actually did but the role was good grounding in terms of his responsibilities.

Jared’s next opportunity took him to North Otago managing a developing dairy conversion for three years, starting with 400 cows and peaking at 1100 under spray irrigation.

In 2009 three events happened in Jared’s life – he married Susan, took on a lower order sharemilking contract on the property he had been managing and joined Federated Farmers – all three have shaped his future.

The property was also to become the couple’s base while they established two herd owning sharemilking contracts on neighbouring properties, investing in 1000 of their own cows. “Federated Farmers featured for us when we were first time employers back in 2009,” says Jared.

The couple’s contract eventually finished at their ‘base’, so retaining their herd owning of 1000 animals on the neighbouring farms, they spent a couple of seasons in Omarama on a large scale lower order operation.

“That was our peak – we had 2500 cows, 18 staff and running three units. With a $7.00 forecast it was looking like a major step forward with the objective of farm ownership.”

But, with the best laid plans of mice and men, the dairy payout that year was considerably less and hopes and dreams were shattered.

“We had to consolidate from where we were because at the scale we were operating we were too exposed – pushing the boundaries of our equity position relative to what we were operating. We’ve made some real progress but we did get very close to coming un-stuck in those tough payout years.”

After restructuring their lower order contract and vacating it, Jared and Susan maintained their herd owning contracts and, in Jared’s words, ‘worked damned hard, drove costs down and pushed performance up’.

“We went from a stage of employing a lot of guys to next to no staff and went back to milking cows ourselves – basically processing 1000 cows through two sheds. What we then did was take the opportunity to sell cows. We were patient in selling our herd. So we were herd-owning sharemilkers and were looking for an opportunity to buy land – that was the objective.”

Both in their mid 30’s, and with two year old Heidi, the couple asked he question, ‘did we want to continue operating as we had been for the last 10 years – or did we want to make a change and strike a balance between business and personal life?’

“So we ended up purchasing a 178ha dry stock property, half way between Duntroon and Kurow. While our dairying days in terms of milking cows are certainly not complete, they have finished for now as at the end of the last season.”

Having milked a lot of cows over his time, thrashing the system hard over the last few years in terms of how hard he and Susan needed to work to keep the business alive, Jared says he has singed his interest for doing more of the same.

“The dairy passion is now more at an industry level, rather than the daily farm requirements which have been our bread and butter up till now. I’m certainly interested in contributing at an industry level particularly with what we are seeing at the moment with some of the policy that is very much steering in the direction of primary production.” 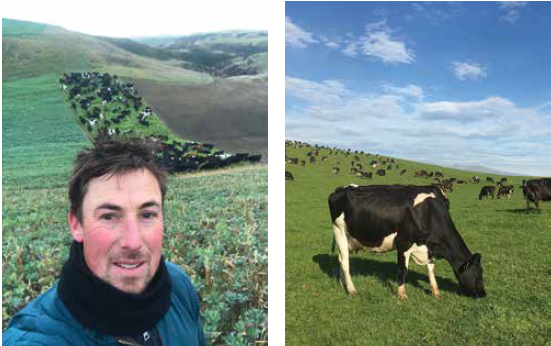 Aerial view of the farm; Jared on the brassica paddock and the dairy herd grazing.

Having seen the Federated Farmers machine in action and met some of the quality people working in the policy space, Jared firmly believes in the organisations collective advocacy strength working on behalf of all primary producers, and is pleased to be part of that.

Tags:
Previous Article
Dairy conversion a plunge for Luke
Next Article
116 years of farming on the ‘thousand acre block’