Couple far from the comfort zone

Hamish and Rachel address the crowd at The Hawkes Bay Wairarapa Dairy Industry Awards field day, hosted on the farm where they work (above)

Their journey is one of consistent growth and they’re always searching for the next challenge.

“We both finished our masters more or less at the same time and we were looking at options of where to go next and we thought the best use of our knowledge was to put it to practice on farm,” Hamish says.

Rather than starting their careers at the bottom and working their way up, Rachel and Hamish jumped straight into contract milking, milking 630 cows for Stephen and Marie Hammond and Irene Hammond, on their 173ha property in Greytown.

“I didn’t see it as that big of a step,” Hamish explains.

“I had done six years of study and Rachel had done five, so in terms of theory on how to run a farm we had a lot, it was just about going through the process of actually doing it. It was just a switch in mindset and putting in the work.”

During their second season as contract milkers, they decided upon entering the 2019 Hawkes Bay Wairarapa Dairy Industry Awards to gather some more knowledge around their business and to help them progress.

Proving that jumping into business head first was in fact the right move, the pair were thrilled to be named the 2019 Hawke’s Bay Wairarapa Share Farmers of the Year along with being awarded four merit awards and $7,320 worth of prizes.

Hamish says the competition helped them to formalise a lot of their processes and strategies and has given them a great network of friends.

“There’s a lot to be gained from meeting new people, hearing their stories and how they’ve dealt with things, it gives you a little more motivation, we are all very like-minded people.”

Back on the farm, they’re continuing to try new things in order to keep learning and growing and have made the switch to once-a-day milking (OAD) – a move not so common among contract milkers Hamish admits. 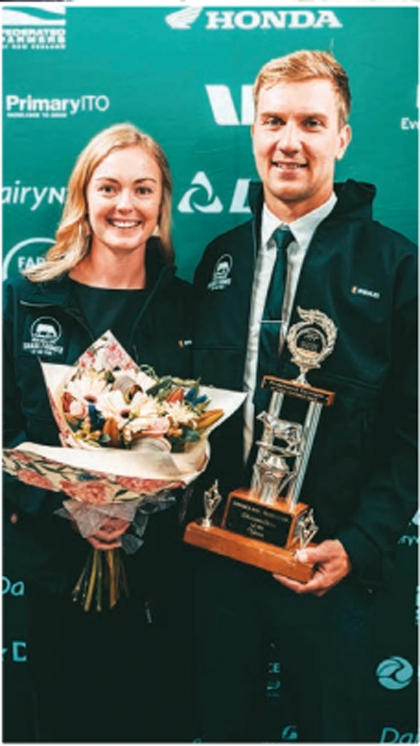 “Most contract milkers want to maximise that milk production but because the farm owners are my family we were happy to try and pursue profitability and sustainability,” he says.

After renegotiating their contracts, they budgeted for a 13 per cent drop in milk production and were happy when the decrease was just under 11%, considering cow numbers were slightly reduced as well.

“We have good cows and I think if you’ve got good cows they will do well on any system.”

They have no regrets switching to OAD and are enjoying the added flexibility in their roles.

“We are still working a lot but it just gives us more time for other jobs and means they get done more effectively… I think more farmers should do it, I don’t know why you wouldn’t.”

With the long term goal of an equity partnership or 50:50 sharemilking, Hamish and Rachel are looking to grow their business and are currently in negotiations to lease a 60ha neighbouring property for rearing animals on.

Hamish says, if it goes ahead it will add a new element to their operation and it’s an exciting step in their journey.