Upward of 8000 Romdale ewes are run on Cattle Flat Station.

Southland Federated Farmers president Geoffrey Young says he is thankful for the opportunities that have presented in his farming journey and counts the purchase of Cattle Flat Station near Balfour as one of his most important achievements.

“The greatest milestone for me was going through tenure review and obtaining the freehold title of a former pastoral lease,” says Geoffrey.He has been on the expansive 5400 hectare station since 1993 and in that time has worked hard to improve its look, productivity and necessary infrastructures.

He’s undertaken a lot of fencing, careful not to put in any bulldozed contour fence lines, leaving its splendid natural footprint intact.“We have only put in about an extra half of a kilometre of track also, from the basic network that was already here. I don’t like to see hill country carved up with excessive track and roading.

And with such a large property a wide range of land forms occur, from productive river flats, native bush, pristine spaces and spectacular high elevation tussock country. A prized feature of the property is 20km of the Mataura River running along one boundary. Geoffrey says most keen anglers appreciate the opportunity to walk up the river into a wilderness situation.

Upward of 8,000 Romdale ewes are run on the property with the vast majority left uninterrupted to lamb on the hills.“We only lamb lighter or older ewes on the flats. As a breed Romdales perform very well. We also purposefully hold back docking a little later, so the lambs can be drenched and dipped and have the best chance to mother-up properly.”

Come 4 January mustering for weaning gets underway and this is done in two cuts, each of 3-4 days duration. On about 20th January each year, most of the lambs are sold as store lambs for prime lamb finishing.

Several years after purchasing Cattle Flat Station Geoffrey got rid of the traditional halfbreds and worked his way into Romdale.Romdales are ideal for this station as they are both hardy and productive, however the value of their clip is the biggest challenge with strong wool values barely covering the cost of harvesting.

Romney/Perendale cross genetics are sourced from Turanganui and Mt Guardian studs. “We get great progeny from their rams with more bone and frame and a lot more volume. They grow into very good carcass lambs for the very lucrative prime lamb trade”.

Each year Cattle Flat Station also calves 550 cows, including R2 heifers and winters about 250-300 yearling cattle and up to 50 bulls. The Hereford bulls are carried for two years and sold for dairy sires.“We have started using quite a bit of Angus genetics as well and with the Hereford/Angus cross you get good hybrid vigour especially for our high country.”

The station has three main watersheds and one of the challenges of its terrain is two high saddles of 2500m and 3000m respectively which stock have to be moved over.

Helping on the farm are two experienced shepherds with good, hard-working dogs and with a distance of 22km from the woolshed to the last gate on one side of the property the staff and animals travel massive distances. Autumn and Winter mustering necessitates overnight stays in two huts on the station.

As is traditionally the case, horses are essential for moving about and accessing often challenging terrain.Geoffrey enjoys his regular rides across the property, seeing first-hand how the pasture and animals are performing and still enjoys going out on some musters over the outstanding environment he calls home.

His involvement with Federated Farmers is something he is proud of and he considers it an honour to be in a leadership role. It’s a way of giving back and contributing to a sector he is passionate about. He was initially a high country representative and then progressed to vice president.

Originally starting out in Young Farmers as an 18 year old he represented Southland in the national stock-judging competition and gained first place in the novice section.“I’ve also always had an interest in politics, both locally and nationally, like my parents.

He moved up to the role of Provincial President about 18 months ago. Geoffrey says its satisfying to be connected with Federated Farmers given it is one of the most respected and influential lobbying groups in Wellington.

“We have ready access to all the politicians at any time, although they don’t always listen. It is most important that farming has a really strong voice in these changing times with so many new rules and regulations heading our way. Farmers are open to change, but we must have viable and sensible pragmatism to remain the most efficient farmers with the lowest carbon footprint in the world.” 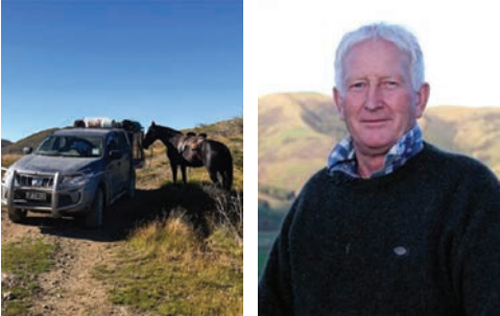