Auckland/Hauraki Share Farmer of the Year winners Ethan and Sarah Koch started their careers outside of dairy farming, Ethan as a builder and Sarah a teacher.

Stepping outside one’s comfort zone and pushing personal limits is a means to get ahead and with farm ownership a long term goal, a willingness to continue learning and growing is a necessity.

It’s that drive that share farmers Ethan and Sarah Koch believe won them the title of Auckland/Hauraki Dairy Industry Awards Share Farmer of the Year, combined with “genuine hard-work and a passion for the dairy industry,” Ethan says.

It wasn’t an easy process and involves a lot of work, he says, but it was a great way to assess their business and gain valuable feedback from the judges.

Both Sarah and Ethan come from dairy farming backgrounds, their families own farms in the Waikato however, dairy farming wasn’t the pair’s first career choice.

After gaining a Bachelor of Social Science, majoring in history and a Graduate Diploma of Secondary Teaching, Sarah’s career began in teaching and Ethan began his working life as a builder.

They chose dairy farming to chase their passion and for the lifestyle it offered.

“We value family time and share milking affords us the ability to be at home with our family, but ultimately we are passionate about the industry and absolutely love dairy farming.”

The couple now have a two-year-old son and a baby due in September which has strengthened their desire for the flexible lifestyle.

They are currently 50/50 sharemilkers on Laurie and Ingrid Bylsma’s 82ha farm in Onewhero.

They’re milking 200 cows, predominantly friesian “but working towards a F12 J4 cow in the future,” Sarah says, through a 17-aside herringbone.

“We were a good example of how an older shed doesn’t limit grading performance and herd health.”

The farm operates a system 3 using an in-shed feeding operation – “meal pellets and pke blend from Takanini feeds,” – their balayage is conserved during feed surplus and fed in deficits.

“Supplement is used to extend lactation and fully feed cows. Through the past couple of particularly dry months we have fed potatoes and recently purchased some palm kernel in order to feed deficit to put condition on cows.”

Dry months can be a challenge due to the soil type on the property.

“The soil is volcanic ash which is very fertile,” says Ethan, “but dries out quickly so we are prone to summer dry – however this is an advantage in the winter.”

The topography further complicates things; only 25% of the farm is fl at the rest is comprised of rolling to steep hill country but this hasn’t meant poor production, they’ve managed to make it work and were proud of the record production for the farm in their first year as sharemilkers. 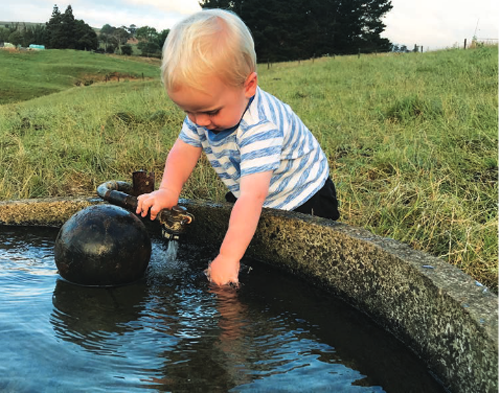 Ethan and Sarah are wanting to continue growing their equity to purchase their own farm in the future and they believe their recent win at the Auckland/Hauraki Dairy Industry Awards backs up their knowledge and will help set them up further down the track.

“We are hopeful that the win will help us secure future jobs and positions. The competition has challenged us to step outside of our comfort zones, take calculated risks and not settle for the status quo.”

Tags:
Previous Article
‘Too short’ for pro rugby, Mark scores under the posts at NZ Dairy awards
Next Article
Award success a triumph over adversity