Having done his time travelling, driving heavy machinery and seeing a bit of the world, 35-year-old Earl Worsfold came home 12 years ago to run the farm next door to his parents which they were leasing, as they have done ever since.

At that stage his parents, Syd and Trish, were farming 140 hectares of wheat. These days Earl leases 100 of those which he runs as part of his 410 hectare farming system.

“My father’s my cheap labour I suppose,” he says with a laugh. “He still grows 40 hectares of wheat, which is what he likes to do. He doesn’t worry about the stock side of things, and that’s his share of the contract for the flour mill.”

Since he came home the farm has grown in size as well as complexity as Earl has diversified the crops being grown and set up a rotation system designed to make the most of their land.

They’re on the Canterbury plains out of Darfield, with stony river flats where the Selwyn and Hawkins River meet. “We don’t crop them but they’re useful in that they grow the grass in early spring for stock,” explains Earl.

“They’re not irrigated so they dry out in ten days of hot weather so it’s a bit of a balancing act.” Stock grazing is an integral part of Earl’s farm system although they do it a little differently to some.

“In recent years we’ve gone to dairy grazing young stock through to mating. So they go back to their owner in October and come back to us in January, early February or thereabouts and we take them through to calving before we send them home again.”

It’s a carefully planned allocation of resources with the clover and rye grass plantings providing food for the young calves before the fields are closed up in October and the grass allowed to go to seed for harvesting as early as possible in the new year. The seed shatter is left to grow again for in-calf heifers on their return.

With 200 hectares growing 50/50 wheat and barley, another 50 each in canola and peas, and the gaps filled with the likes of linseed and specialist seeds such as radish grown for export to Asia and Europe, Earl’s working to maximize any opportunity the crop rotations offer.

“We plant a fair bit of green feed, rape or some-thing like that after the peas for the winter trade lambs we take. Last year we took around 3000 and this year a few more than that hopefully. They seem to be paying the bills fairly well.

“It’s a constant juggle between planting for seed, specialist or otherwise, planting peas, then rape for the lambs, then perhaps a cereal to follow. “We’re double-cropping quite a bit,” says Earl.

“You don’t see paddocks fallow like you used to. People can’t afford to.Margins are that tight on everything. You’ve got to keep pushing to make it stack up.”Earl’s mindful of the soil in his crop rotation and the need to keep it in good condition.

“We’ve been working all our stubble back into the ground for 25 years with a set of discs straight after harvest which helps with the organic matter. The rye grass in the mix is a good break crop for soil structure and clover is good for soil structure too and fixing nitrogen as well. We tend to get pretty good cereal crops after clover.” 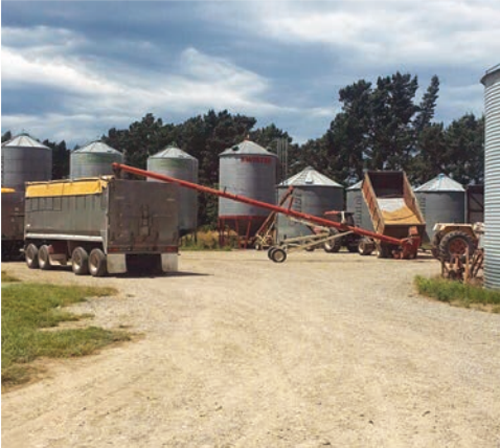 Grain is loaded onto transporters.

Although they predominantly grow milling wheat because of the local growing conditions and their proximity to Christchurch flour mills, it’s obvious that a great deal more than good luck led to the family’s feed wheat crop winning this year’s Wheat Grower of the Year Award.

“Dad might have preferred to win the prize from a milling wheat given that’s always been his specialty,” says Earl, “but we were all still pretty pleased to win the overall award for 2019.”