PHOTOS: Kiwi Quinoa’s Dan and Jacqui Cottrell established Kiwi Quinoa with a commercial harvest of one and a half tonnes in 2015. In February this year the company produced a 70-tonne harvest.

Amidst a very traditional sheep and beef farm in the Central Plateau high country in the North Island grows a very special crop – the mother of all seeds.

Quinoa — sacred to the ancient Andean people of South America who domesticated it 4000 years ago — became the seed of an idea when Dan and Jacqui Cottrell toured the Peruvian country roads back in 2012.

Quinoa is one of a few plant foods that is a complete protein, providing all the essential amino acids typically found in meat and milk that are required by the human body but cannot make itself.

Back in Aotearoa, and recognising the similarities in landscapes, Dan and Jacqui embarked on a voyage of discovery learning why the high protein plant had never before been grown in New Zealand.

Turns out that most varieties have an outer layer of saponin.

While providing a natural pesticide against birds and insects, saponin must be removed before the seed is fit for human consumption — creating an extra processing step and the barrier to growing the plant.

Not to be deterred, Dan and Jacqui continued research, consulting with plant breeders across the globe, eventually discovering a variety that didn’t contain saponin.

By 2014 the adventurous couple trialed four varieties and discovered their superstar — a seed called Jessie that exhibited high yield potential and the ability to outperform weeds.

“We knew that there weren’t any herbicides registered for use with quinoa so we didn’t have a herbicide option,” says Jacqui.

“We wanted something that was reasonably fast growing in a reasonably short growing season and Jessie lends itself well to that, needing just 110 days.”

By 2015, Kiwi Quinoa Ltd was established with the first real commercial harvest of a tonne and a half providing adequate seed to plant the next years crop and also sell a little to a fine food specialist in Auckland. 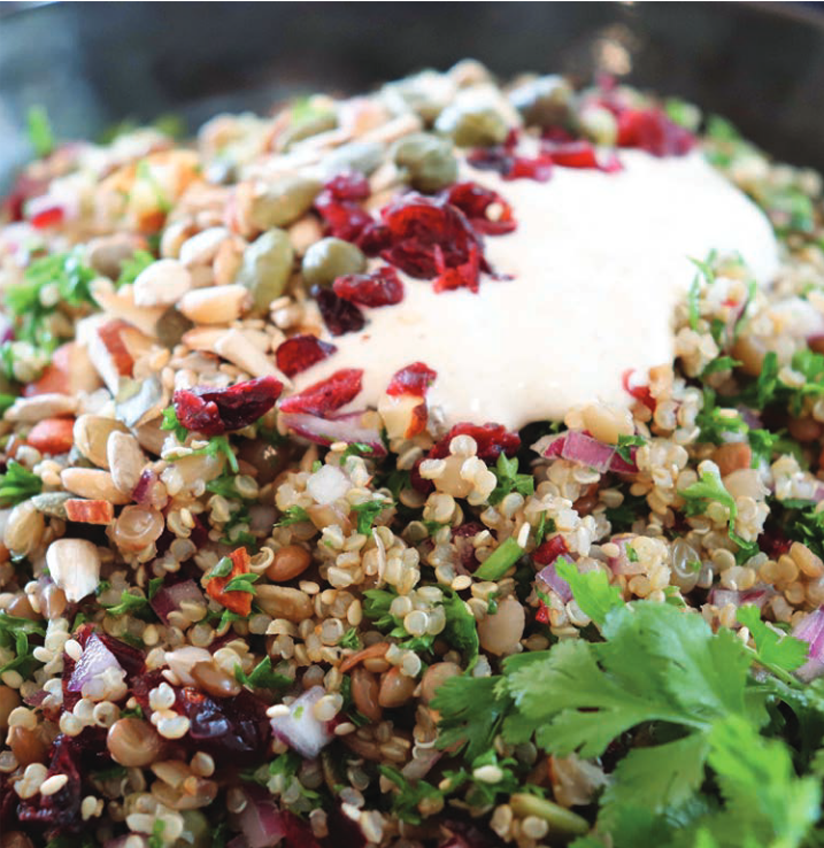 Fast forward to February 2019 and Kiwi Quinoa produced a 70 tonne harvest cleaning down to about 55 tonne once moisture and unwanted weed was stripped out.

Located in the little community of Moawhango, about 25 minutes out of Taihape in the Napier-Taihape Road, the Kiwi Quinoa operation is melded n with Dan’s parent’s 600-hectare sheep and beef farm on beautiful volcanic ash soils.

With the farm being mostly high country there is 30 – 50 hectares available for quinoa, which requires combine harvester access.

Neighbouring property can also be leased as growth demands.

Jacqui, whose background is in agronomy and soil science, says the soil provides perfect growing conditions.

“Plants just take off quickly in spring. It’s very free draining with huge organic matter content that grows great grass and crops. We’re planting the seed into really fertile long-term pasture ground so it has a lot of mineralisable nitrogen available and a healthy soil microbiology providing all this goodness that comes through in the crop. Our variety is like rocket fuel sitting up at 19.5% protein where imported quinoa is 12 – 14%.”

While Jacqui and Dan have dipped their toes in the export market to Japan with potential to enter other Asian countries, their current focus is cementing the domestic market.

“Domestic has been our real focus with a spread of value-add products like puffed quinoa being used in breakfast cereals. Then we have a retail/supermarket offering. There’s huge opportunity for growth of quinoa use and recognition in the domes-tic market. Getting into My Food Bag has opened up quinoa to new consumers.”