The whole package, from go to whoa

Dairymaster’s MooMonitor+ tracks animal behaviour with the use of quick-release collars fi tted to the cows.

The fact that Dairymaster is able to provide a milking solution from start to finish, including all the technology, is a huge advantage to farmers, says Craig Burrows, director of Dairymaster Milking Systems NZ.“For a revolver we can build the platform as well as all the hardware and software required from a simple shed right up to the most complex.

This means all the hardware and software works together seamlessly, we have greater control over quality and timing of projects as there is no waiting around for contractors and this also makes it easier for our clients as they have one point of contact for their project,” he says.

Dairymaster has had a presence in New Zealand for some forty years. Craig and wife Julie have owned the company since 2005. Both bring extensive experience: Craig has been in the industry for 37 years, starting as a technician and Julie worked in sales.

The company has grown from originally two staff to a peak of 22 as farmers have increasingly come on board with the products and technology offered.

Craig says that although New Zealanders are great innovators in the industry it’s difficult for Kiwis to compete long term with the big internationals. Being an international brand, New Zealand farmers can benefit from the advanced technologies offered by Dairymaster.

For example, the Dairymaster Milking System offer technology that aims to milk as close to nature as possible. High vaccuum is applied during the milking phase and low vacuum during the resting phase just as a calf would naturally suck and release, says Craig.

Dairymaster also milks and rests all four teats at the same time. Craig says that this unique way of milking is different to anything else currently on the market and ensures a faster, more gentle milking.

He says that Dairymaster liners play a key role in the company’s milking technology scientifically tested to have the lowest slippage rates on the market.“As cows are more relaxed during milking, oxytocin release is greater resulting in quicker milkout and quiet cows. Consistent comments are how quiet cows are, especially heifers.

There is no cup slip or teat end damage, problems other machines can still suffer badly with,” says Craig.Another key technology offered by Dairymaster is MooMonitor+, which helps farmers to keep a track of their herd’s health and fertility. 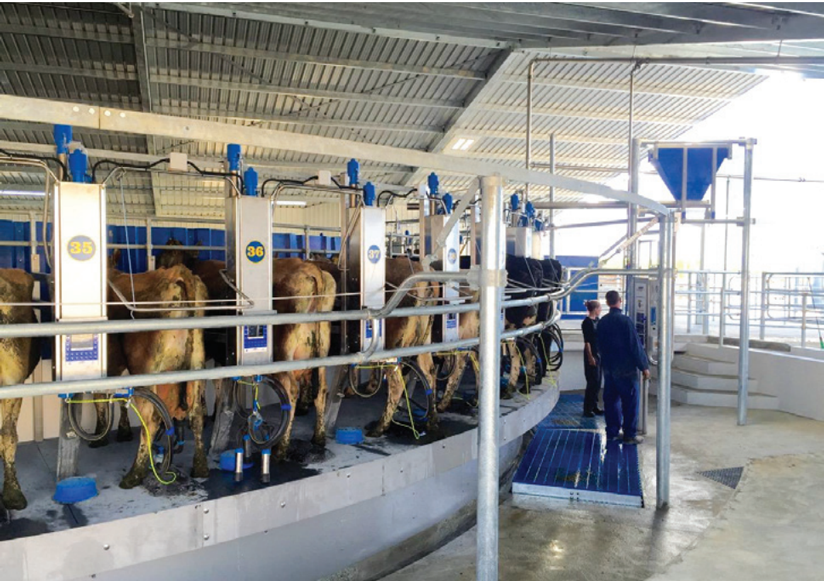 Dairymaster provides start to finish milking solutions, from simple to complex sheds with all the hardware and technology to boot.

Craig says the system helps farmers to make big savings and improvements in these key areas of their business by getting cows into calf quicker and easier.MooMonitor+ is the first system to use very sensitive motion sensing to track animal behaviour 24/7 with the use of quick release collars fitted to the cows.

Earlier systems, and a lot of current systems, use increased animal activity to define oestrus. This has the downside that there are a lot of false positives when the animal increases activity for any other reason,” explains Craig.

“In the MooMoni-tor+ collar is a very sensitive motion sensor allied with a 32 bit processor that does over three million measurements per cow per day. This individual cow information is measured against that cow’s normal behaviour over the previous weeks to determine when there is a change to that animal.”

This information is stored, if the cow is not in range, before being sent by radio signal to a base station. The information is then sent to the internet where it is processed and available on any device connected the internet. This means that the farmer’s vet, nutritionist, AI provider etc can also have access to see what needs doing on the farm.

The farmer can control many things from a MooMonitor+ smart phone app such asassigning collars, putting the animal on a watch list, adding a heat or insemination (including which bull), setting drafting, putting in a calving, pregnancy check, body condition score, putting in a health event or a ‘do not breed’ time on the animals, adding a dry off event or deleting the animal from the farm.

The app also lets farmers load bulls so when the farmer puts in an insemination they can say what bull was used. Craig says the product has had benefits for all farmers – even those that were not having problems getting cows in calf save significant amounts of time, freeing up staff to focus on other tasks on farm.

“As all the data is sent directly to your phone, all the information is right there in your hand so we find people use MooMonitor+ regularly as it is so easy.” Craig says that MooMonitor+ is a good example of Dairymaster’s focus on developing products that put the farmer firmly in control.

“Dairymaster is about technology combined with a practical understanding of the day to day requirements of dairy farming. We aim to help farmers do the job easier, with happy relaxed cows and to increase their profitability as a result.”

Tags:
Previous Article
A quinella of sorts for Tahora stud
Next Article
NZ a leader in smart use of water