Electrical solutions for all farm work

Chris and the team from Chris Perrett Electrical Solutions enjoy working with their farmer clients, seeing the new technology as it’s developed and working out how to integrate it into farm systems, and ultimately making work and life easier for the farmers.

The dairy industry comprises close to 80 per cent of Chris Perrett Electrical Solutions’ business, from its location in the heavily rural South Taranaki.

“I have a lifelong affiliation with farming.My parents were sharemilkers when I was young, so I’ve grown up on dairy farms and gone to rural schools.

“Now I’m in business, I enjoy working for farmers as they’re pretty easy going, they just need their jobs done. They’re always interested in the different options I can put in front of them, and they’re pretty quick to make decisions.”

With Chris’ understanding of his rural clients and their businesses, he understands how important electrical solutions are to keep their farms operating, and makes it a priority to get to the farm and get things moving for them.

Chris Perrett Electrical Solutions works in dairy sheds, both new builds and renovations, working in with a number of builders and suppliers who are also heavily involved in the dairy industry.

Chris says dairy shed electrical solutions today involve automation of feed systems and drafting systems, with him and his team packaging different products in the shed and making them work together.

“I’ve done that many of them now that as they’re discussing which products they’re going to be using in their shed, I’m already thinking about how I’m going to make them work together,” he says.

Effluent systems have been a major part of Chris Perrett Electrical Solutions’ business over the past five years, with many farmers upgrading their systems and a lot of new ideas and methods of pumping and storing effluent coming to the market.

“There are lots of different theories behind storage of effluent and how to applicate it. We are coming along as a third party to make it all work together.” 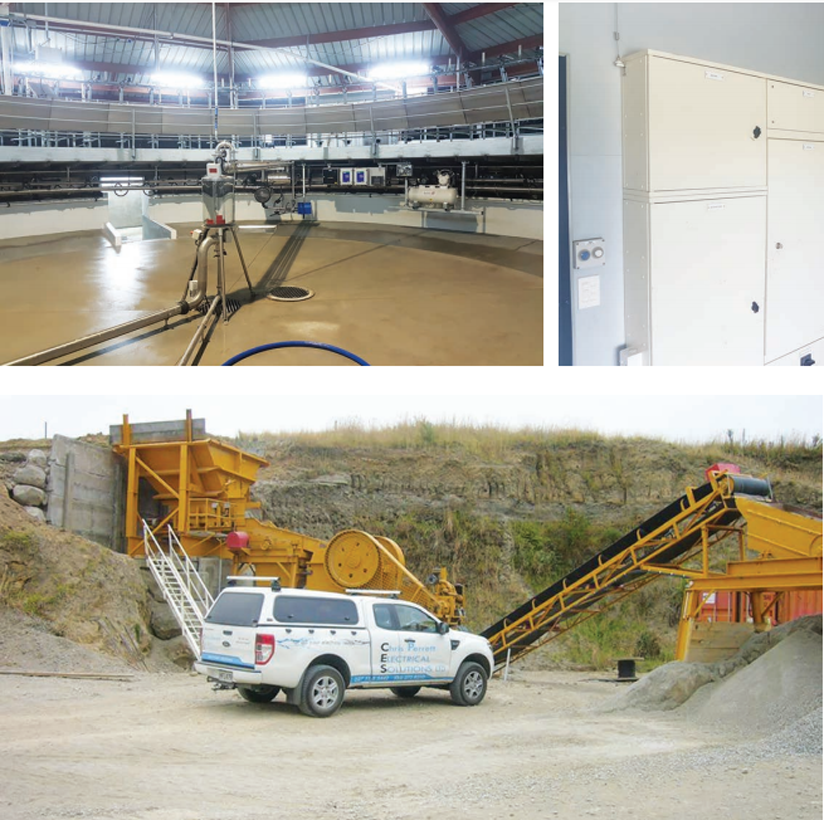 The chilling of milk has seen some regulation changes from both Fonterra and MPI during the past four years which has created another stream of work in this area for Chris Perrett Electrical Solutions. Farmers are increasing their refrigeration capacity to be able to chill milk more quickly and meet the required temperatures both during and after milking.

“There has been a lot of developments in the technology being used,” Chris says.

Chris will often work out for his farmer clients what a different unit is going to cost them to run on a daily basis, how many kilowatts it’s going to take to chill that milk or pump that effluent, and convert that into a dollar figure so the farmer can make an informed decision before committing to a purchase.

With all farm electrical work covered, Chris and the team are also on hand to complete the domestic electrical work for the farmer’s home, staff housing, and any new housing.

Chris Perrett Electrical Solutions runs a team of 10 people, eight on the tools including four apprentice electricians, and two in administration including Chris’ wife Sara.

The company was established in late 2011, starting with just Chris and he’s steadily increased the team ever since.

He says there is still room for more growth, it’s just a matter of finding the right electricians to join the team.

Chris Perrett Electrical Solutions’ customer base is always increasing without the need to advertise, thanks to word of mouth and referrals by existing customers.

“We love our referred customers,” Chris says. There is an element of trust in that relationship before we’ve even met, and they know what we’re like reputation-wise.”

Tags:
Previous Article
‘Accidental’ dairy farmer voted top manager
Next Article
‘The equipment we manufacture has been designed by a farmer for a farmer’