Dryden Lodge’s Jenny and Brent Geddes are the only dairy farmers in Canterbury to achieve Fonterra’s coveted Legend status.

Achieving Fonterra’s coveted Legend status was a proud milestone for Burnham dairy farmers Brent and Jenny Geddes.  Legend status is gained by producing top quality, grade-free milk for 10 consecutive years and only 34 of the co-operatives 10,000 farms have received the title. Brent and Jenny are the only dairy farmers in Canterbury with the honor.

Senior leader Logan Thornley has been relief milking for the Geddes family for more than 10 years, becoming a full time team member when he finished school nearly five years ago.He admits maintaining the grade-free milk status puts a bit of pressure on the team but he is proud to say that it’s something they are able to achieve.

“We don’t want to lose it, it’s something we are really proud of,” he says, and with that in mind he is a stickler for following the procedures that are put in place to at. “It’s all about making sure people don’t cut any corners, if anything doesn’t feel right or look right, do something about it rather than ignoring it,” he says.

Brent adds that it’s something they are all extremely proud of but milk quality is only a very small piece of the puzzle that is their farm, Dryden Lodge.Dryden Lodge comprises 235ha and milks 830 Friesian/Jersey cross cows through a 60-bale rotary.

It was converted to dairy in 2015 after Brent and Jenny moved from their previous farm in Greenpark after Brent’s father Rob passed away in 2012. The business is run in partnership with Brent’s mother Barbara who resides in Lincoln. Barbara enjoys still being involved with the farm as needed.

The operation runs like a finely tuned machine and it has to to produce grade-free milk with a low somatic cell count – staff, animals and the environment must all be managed to the highest standards.Jenny says it’s made easier because they’ve been really lucky to recruit good staff and it’s clear by the smiles and laughter shared between them that it’s a good place to work.

High shed hygiene standards over the last few years are also credited to former employees Kendall Ward and Wilf Vigers. Every morning, the team meets in the office to discuss the day’s plan and everything is written on the whiteboard where the farm is care-fully mapped out.

“Everyone is more engaged if they know what is happening and are all working towards a common goal,” Brent says. On the environmental side, native plantings are underway with more than 600 meters already planted. “The plan is to do one to two lines a year, each line is about 600 meters long.” 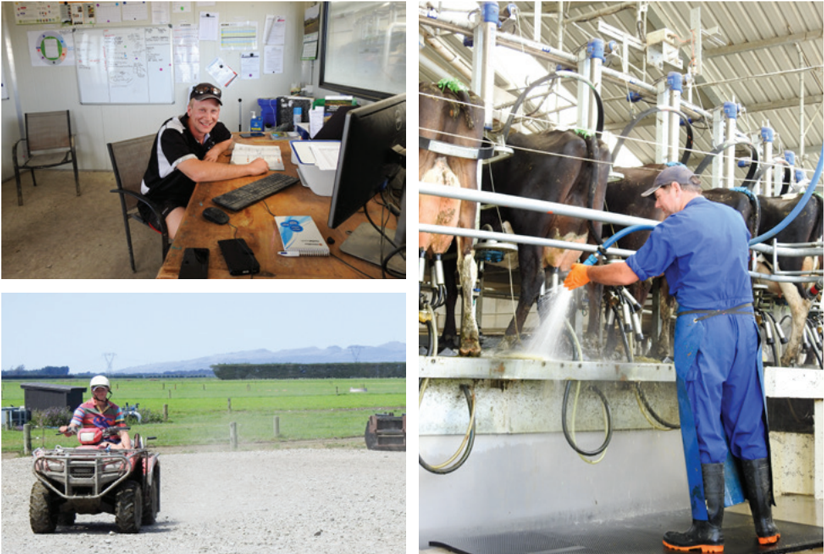 PHOTOS: Dryden Lodge senior leader Logan Thornley in the office; Tomo Neiman on the quad bike while Brett Leggit is busy in the milking shed.

The majority of the farm is irrigated with two centre pivots managed by smart technology Regen, and moisture meters by Aquaflex. About 28ha of the farm are used for wintering and last year they wintered 510 cows, the rest were wintered on a neighbouring property. The animals at Dryden Lodge are content. There isn’t a bellow to be heard in the milking shed.

The cows are well-tempered, patiently awaiting their turn to be milked. The atmosphere is calm – a true reflection of a well-run and happy environment. There is a real sense of pride in dairy farming for everyone at Dryden Lodge, for the Geddes family it has been their livelihood for more than 80 years – spanning four generations.

Whilst they are proud farmers, they have been very disappointed in the negativity surrounding the dairy industry in both social and mainstream media over recent times.Breaking that stigma and showcasing what the dairy industry is all about is important to them so when they were approached by Avonhead Primary School in August to host some students for the day, they couldn’t turn them down.

“We had just finished calving so it was a really busy time of year but we couldn’t say no because we felt like we needed to show them what dairy farming is,” explains Jenny.The students had done a whole unit on agriculture and were all very excited about the visit.“Some of them had never seen a real cow up close before so it was a real buzz for them,” says Logan.

Jenny says the kids were really captivated and asked some really interesting questions, Fonterra even brought their tanker out for the occasion and every child left with a chocolate milk to top the day off.With three children of their own Brent and Jenny want dairy farming to be something their children are proud of and it’s their goal to run a sustainable operation so, if they want to, their children can continue the same path.

Brent says, like his father, everything on the farm that he does is done to the best of his ability. The staff are on the same page and are all vital to the success of the farm. Fonterra’s Legend Status is a huge achievement but it’s only a small piece of the puzzle that is Dryden lodge.