Grandchildren Bella and Jackson are an integral part of the Bella Vacca business.

Producing good food that people love and want is at the heart of what Northland farmers Gav Hogarth and Jody Hansen love to do – milking cows and bottling their own milk.For the last nine years Gav and Jody have been sharemilking 160 cows on 61 hectares of land owned by Pat and Nin Goodue.

Located near the small town of Kawakawa in the Bay of Islands area, the farm has been in the Goodhue family for 105 years.Gav and Jody’s herd is 90% purebred Jersey with the balance made up of Jersey/Brown Swiss cross.

Seven years ago Gav and Jody established Bella Vacca Jersey Stud – Italian for ‘Beautiful Cow’ — Bella Vacca is also the proud label on the bottled milk the couple produce right next door to the 20-aside herringbone shed.Chatting to me over the phone, Gav says there were two reasons he and Jody started bottling their own milk.

“Fonterra’s payout wasn’t reliable and the way the dairy companies work whether your milk is high quality or shocking, you get paid just the same. We thought: ‘well we know we have a good product with jersey milk, which is full of protein and fat that people need to grow and live’. So that’s what we decided to do – we thought we would add value to what we do.”

The planning process started 30 months ago and Gav says it took a long time to get approvals from MPI. Initially selling raw milk, the first bottle of pasteurised milk in a glass bottle labelled Bella Vacca rolled off production June last year.“When we’re milking the cows the milk is pumped straight into the plant.

It gets there so fast it’s still at body temperature. It then gets heated up to 63 degrees for 35 minutes, and then chilled down to 4 degrees which takes about two minutes. Then the milk is put into 1 litre glass bottles that have been screen-printed and kiln fired so the labels don’t come off.”

About 50% of total production goes to Fonterra and the rest goes into Gav and Jody’s own production plant. Growth in the Bella Vacca business has been in double figures as a percentage each month so the amount bottled is changing all the time. Gav says if their own supply is exhausted there are opportunities to source milk from other suppliers who maintain high standards.

“Currently we produce 5000 bottles of milk a week, supplying 35 shops from New Zealand’s furthermost north Four Square store in Houhora and the furthest south we go is Grey Lynn in Auckland. The truck goes to Auckland, Bay of Islands, and Whangarei three times a week and once way up north. In total the truck is on the road six days out of seven.” 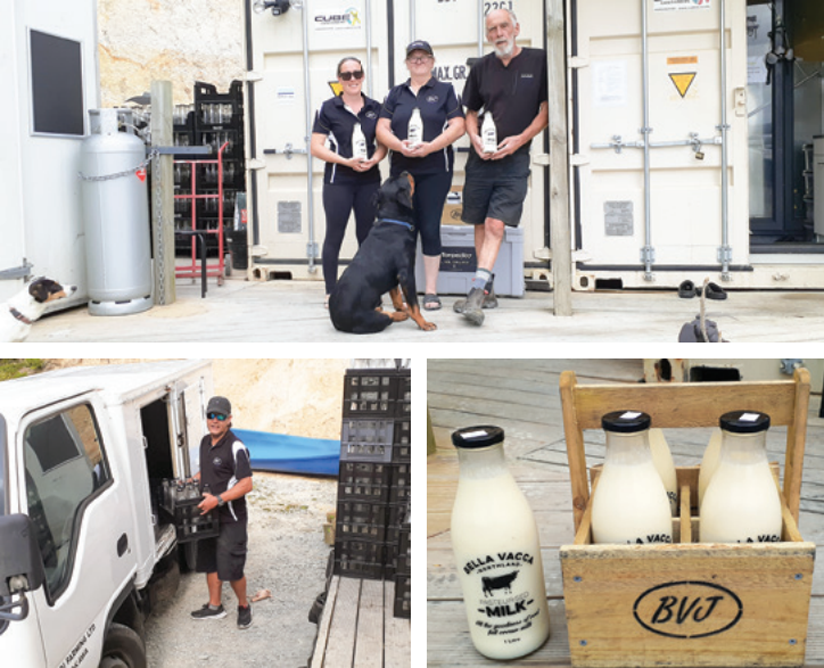 PHOTOS: Daughter in law Amy Deal, Jody and Gav Hogarth, with Axel the dog eyeing up a bottle of milk; Delivery driver Glenn Gray unloads empty bottles to be sterilised and refi lled; As well as the glass bottles customers love the Bella Vacca Jersey wooden carry crates for their milk.

The Bella Vacca business has driven another on-farm change to ensure a consistent supply of milk.Of the 160 cows, only 120 are milked at peak because Gav has shifted to a quarterly calving regime – July, October, January and April.

Calving four times a year means every three months fresh cows are coming in with a steady percentage of milk solid.“Because we don’t standardise our milk – we leave all the cream in it – going to four times a year should mean it’s a reasonable standard throughout the year and always about 10% fat and protein in the milk.

“It takes a bit to get your mind around, because it’s a different way of doing things. It is a little bit challenging when you’re putting fertiliser or lime on the paddocks because you have to allow for cows about to calve.

But they’re all little challenges and they keep the mind active.”Gav loves taking the grandkids to town, buying them ice blocks from the corner store and counting the people walking in with the empty Bella Vacca bottles.“There is huge pride in that.”